Pareidolia is alive and well: 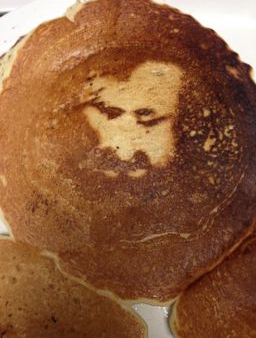 A cafe in Norco, Calif., says that the Mickey Mouse pancake it was trying to make on Good Friday ended up looking like Jesus Christ, something they’re taking as a sign from above.

“The night before, she [his wife Karen] decides to pray about something and the next day on Good Friday we get this pancake,” said Gary Henderickson, the co-owner of Cowgirl Café with his wife Karen, said. “To us it looks like a picture of Jesus looking down, like he’s looking down over us.”

If I had to put a name to that pancake, I’d pick Charles Manson or Grigori Rasputin or maybe Mick Fleetwood before I’d reach for Jesus, but I realize that none of those alternatives are likely to cure lung cancer. And Jesus just might, Henderickson believes.

Henderickson says he’s taking the message to heart, especially since his brother was diagnosed with lung cancer a month ago. But he said he isn’t sure why the Lord has decided to bless him with his son’s image on a Mickey Mouse-shaped pancake. “I can’t explain why God acts the way he does,” he said.

That makes two of us, then.

For now, Henderickson is keeping the pancake in his freezer to preserve it.

Maybe one day, if we pray hard enough, there’ll be a museum where all these important artifacts are on display in climate-controlled rooms. Pancake Jesus will take its (His?) rightful place among Potato Chip Jesus, Pierogie Jesus, Bird Shit Jesus, and everyone’s favorite, Dog Anus Jesus.

***P.S.*** Right Wing Watch points out that Glenn Beck spent a whole segment talking about Pancake Jesus. The radio host even compared the pancake to the Shroud of Turin. The whole thing was too loopy even for his co-hosts, who seemed embarrassed to be associated with Beck (better late than never). Watch:

April 23, 2014
Clemson Football Coach Responds to Complaints About the Religious Nature of His Team... by Not Talking About It
Next Post