Clemson Football Coach Responds to Complaints About the Religious Nature of His Team… by Not Talking About It April 23, 2014 Hemant Mehta

For weeks now, we’ve been talking about the overt religiosity on Clemson University’s football team. They have baptisms after practice and a paid team chaplain. Coach Dabo Swinney has chartered buses to take team members to Fellowship of Christian Athletes breakfasts. It’s over the top and completely unconstitutional at a public school. 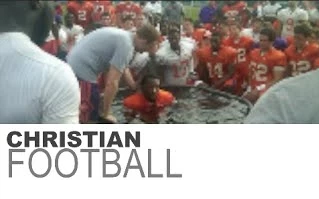 Now, Swinney has issued an official response to the Freedom From Religion Foundation’s complaint letter:

Over the past week or two, there has been a lot of discussion of my faith. We have three rules in our program that everybody must follow: (1) players must go to class (2) they must give a good effort and (3) they must be good citizens. It is as simple as that.

I have recruited and coached players of many different faiths. Players of any faith or no faith at all are welcome in our program. All we require in the recruitment of any player is that he must be a great player at his position, meet the academic requirements, and have good character.

Recruiting is very personal. Recruits and their families want — and deserve — to know who you are as a person, not just what kind of coach you are. I try to be a good example to others, and I work hard to live my life according to my faith. I am proud of the great success we have had in developing good players and good men at Clemson. We win at the highest level and we graduate players who excel on the field and in life because of their time in Death Valley. I want to thank Clemson University and all the people who have reached out to offer their support and encouragement over the past few weeks.

That’s it. So not only did he avoid apologizing, he didn’t even talk about how he pressures players into paying lip service to his faith and pays for a Christian chaplain. No one has a problem with his personal faith; the problem is with the way he pushes it onto the players, directly and indirectly.

I’ve said this before, but his team would be far more welcoming to non-Christian players if they weren’t hit with a constant stream of Jesus when they were practicing. You may not have to be Christian to be on the team, but you better believe they’re gonna work to convert you if you aren’t.

University officials say they’ll “evaluate the complaints,” but their initial statement already suggests they don’t see any problems. They need to take a longer, more serious look at what Swinney is doing because it’s far from subtle.

Coach Dabo Swinney’s prepared statement does not address the fundamental constitutional problem. While it is reassuring to hear that players of any faith or no faith are welcome to play football at Clemson, public school coaches also must not endorse or advance religion. His religion is not the issue; it is his proselytizing in a public university football program. It is a bedrock constitutional principle that government employees cannot abuse their position to advance their religion. Unfortunately, the current climate of entanglement between the football program and religion sends a message of inclusion of fundamentalist Christian football players while excluding all others.

University records reveal that Clemson coaches are intimately involved in team bible studies, church services and other religious activities. Clemson University needs to take corrective action and ensure that coaches are not violating the Constitution. As it stands, the coach has failed to take responsibility for promoting Christianity as part of the football program and failed to state what, if any, corrective action he will take.

April 23, 2014
Why is This Public School's Wrestling Team Promoting the Bible at Every Opportunity?
Next Post

April 23, 2014 "Jesus" Shows Up in Pancake; Bears Uncanny Resemblance to Rasputin, Charles Manson
Browse Our Archives
What Are Your Thoughts?leave a comment