Denver Archbishop Blames Atheists for Disrespecting Human Life and Leading to Our Nation’s Downfall… Like the Nazis April 22, 2014 Hemant Mehta

Denver Archbishop Samuel Aquila (below) has only been in his position for a couple of years, but he already has a firm grasp of the biggest problem in his community: Those damn dirty atheists. 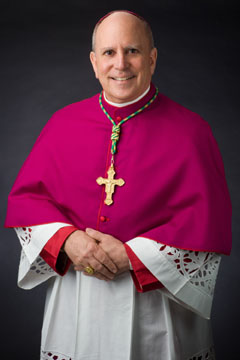 Here’s what Aquila blames on atheists:

Aquila: I think in terms of, first of all, the numbers that claim to be atheist today, or agnostic, certainly are up in percentage of people. Also is the almost just total pushing out of God from the public square. And we know that was not true 50 years ago. That God was, and certainly in the founding of this — of our democracy and all, God was very much a part of that. And very much — it was religious beliefs that this country was founded upon. And when you look at history, when you read the Founding Fathers’ statements, even when you read the Declaration of Independence, there is the recognition of a Creator. And when you look at the buildings that were built a hundred years ago — a hundred and fifty years ago, whether it be the Supreme Court or other buildings in Washington D.C., they have the Ten Commandments on them.

Aquila: And people did not blink an eye at that. And when one studies history, whether it be salvation history or whether it be history — even in the last hundred years, we can see that when a country or a people remove God from the equation, they eventually fall.

It’s the type of ignorant, nasty judgment that Pope Francis has at least offered lip service against.

More importantly, though, what he says is just not true.

Are atheists showing a lack of respect for human life? Not a chance. It was Aquila who led the charge to pass a bill that would’ve allowed state and local governments to get in the way of women who wanted to obtain an abortion. The bill thankfully failed, in part due to activists (some of whom, I assume, were atheists) who have a lot more respect for a woman’s life than the Archbishop does.

Are we pushing God out of the public square? Only if God shouldn’t be there to begin with. Simply put, the government shouldn’t be in the business of promoting Christianity. If it is, we’ll fight back. The issue isn’t that we’re pushing down Christians. It’s that we’re maintaining equality.

And the comparison to Nazis is so obscene, we already have a name for that kind of faulty thinking.

If this guy wants any respect in his position, it begins by not demonizing people who have done no wrong. When the Catholic Church is led by people like Aquila, it’s no wonder young people are leaving the Church in droves.