No, Jesus Did Not Get Booed at a Hockey Game on Easter Sunday April 21, 2014 Hemant Mehta

No, Jesus Did Not Get Booed at a Hockey Game on Easter Sunday

According to a story at Yahoo Sports, yesterday’s Boston Bruins playoff game featured a fan who came out of hiding just for the occasion — and appeared on the Jumbotron: 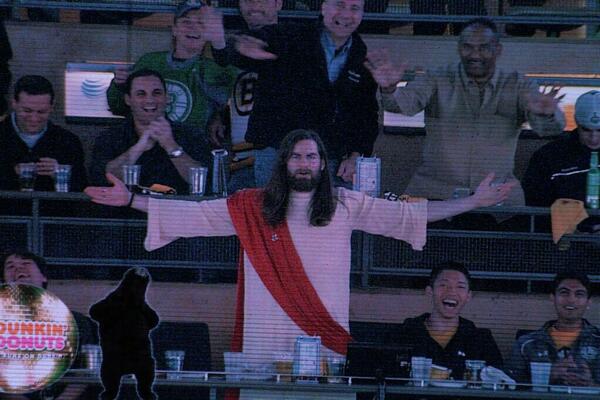 That would be Jesus, a.k.a. “Thor,” who supposedly attended the game at TD Garden after asking around for a ticket… and getting an offer on the condition that he come dressed as the Savior.

The condition, of course, was that Thor come to the game dressed not, as his name implies, as the crown prince of Asgard, but as the Saviour of mankind. And of course he obliged.

It was all working out until he got kicked out of his seat midway through the game for smoking in the arena, said Yahoo’s Harrison Mooney, and the fans booed him out:

Let us pause for a second. Bruins fans — not all, but some — booed Jesus. ON EASTER. Not cool, Boston. If you lose this series, you can probably point to the negative karma accrued by booing the Christ on his big day. (Additionally, you no longer get to make fun of Philadelphia for booing Santa.)

But no fear, Jesus returned during the third period to make his reappearance and he was crowned Fan of the Game! (Just as the Bible predicted!)

So, as it turns out, most of that Yahoo story — which Mooney seems to have written by jigsawing together a bunch of tweets — is waaaaaay off the mark.

I actually spoke with Jesus on the phone last night, just hours after the game ended, and we had a conversation about what actually happened.

Thor — he wouldn’t tell me his real name, but he mentioned that he worked in Boston — actually did this before. He dressed up as Jesus on Halloween, the day after the Red Sox won the World Series. The trophy was on display at the Bruins game that night and he was able to get a picture with it: 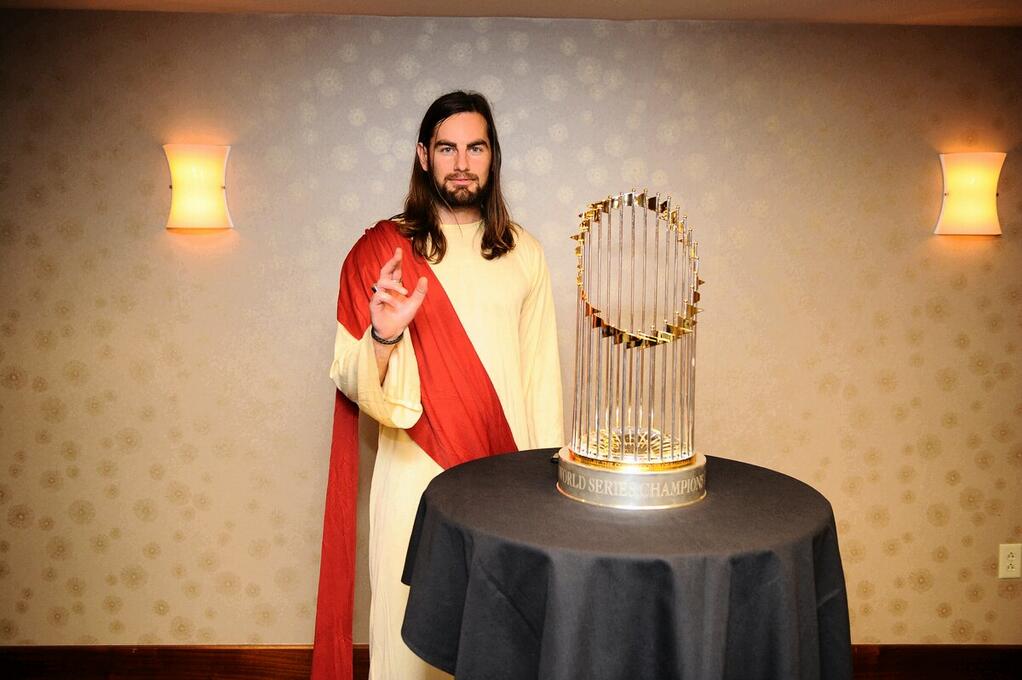 The Bruins won that night in a shootout. Thor was a lucky charm for his home team!

Of course, now that the Bruins are in the NHL playoffs, Thor wanted to bring his lucky robes back to TD Garden, so he tried to get tickets through Twitter, but those plans fell apart. Instead, he and his buddies just happened to find a few people trying to sell tickets outside the stadium and everyone managed to get seats. Good seats. VIP-quality seats. (They’re hard-core fans.)

A cameraman saw Thor dressed as Jesus and told him to be ready so they could get a shot for the Jumbotron during the next commercial break — and the audience cheered as soon as they saw him on the screen. Thor, on a high from that exposure, then started running around the stadium to pump the crowd up — and that’s when the guards decided to get in the way. (Smoking had nothing to do with it. Thor doesn’t smoke.) One of the guards said something to the effect of You’ve had your 15 minutes; now get back to your seat. They wanted to see his ticket to make sure he would go to the right place — but with his robes on, he had no pockets, no ticket, no ID. Nothing.

The fans in the crowd, far from booing him, began handing him *their* tickets just so he wouldn’t get in trouble… but eventually the guards just let him go. And Thor went back to his seat thinking his fun was over for the night.

But then, during the third period, the camera found him once again and he was named “Fan of the Game.”

No booing. no smoking. Just a guy having some fun on Easter Sunday by making an appearance in costume.

I asked Thor if he was an atheist, and he surprised me by saying that wasn’t the case. He’s actually somewhat religious, though the label he uses is still a bit nebulous. He clearly didn’t mind dressing up as Jesus, though, if that gives you any indication of where he’s at.

Also worth noting: Thor’s hair is that length because he decided to grow it out after learning a family member had cancer. He plans to eventually cut it off and donate it to Pantene® Beautiful Lengths where it can be used to make wigs for cancer patients.

Will he dress up like Jesus in the future?

Absolutely, he told me. “Every time I’ve gone to a Bruins game dressed as Jesus, we have won.” He’s hoping to get tickets to all the rest of the home games through the Stanley Cup finals (if Boston makes it that far).

The series against the Detroit Red Wings comes back to Boston next Saturday night for Game 5. The teams are currently tied up 1-1.

(Thanks to Heather for the link!)

April 21, 2014
More Than 50 British Intellectuals Say to Prime Minister David Cameron: "Britain is Not a 'Christian Country'"
Next Post