That’s not at all what happened.

Powers repeatedly sided with Fish, maintaining the idea that there needed to be a separation between church and state. 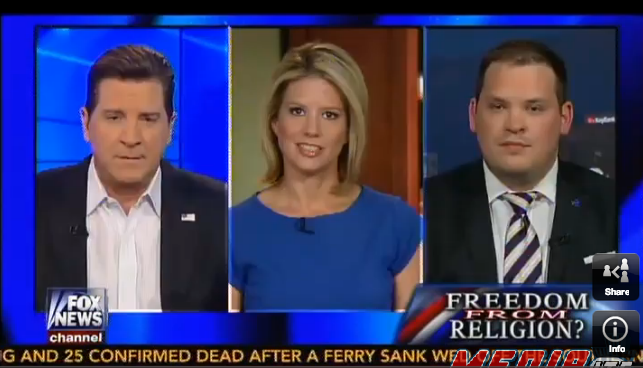 Mediaite has the video and recap:

Powers admitted she’s “sympathetic to the view that it could make people who aren’t Christians uncomfortable,” wondering why, when people of Christian faith have opportunities in their private lives to promote faith, any official position is required to promote it.

They also clashed over whether it’s wrong to have crosses on municipal property. Fish and Powers didn’t like the idea of “endorsing a particular religion,” but Bolling thought it might carry some weight when the vast majority of the population are actually Christian themselves.

Thankfully, the Constitution doesn’t care who’s in the religious majority.

And hats off to Nick! He did an excellent job in a tough environment (and had great reactions when Bolling cut him off).

April 18, 2014
A Center for Atheism Opens Up in Turkey: "No Atheists Will Be Alone Anymore"
Next Post

April 18, 2014 American Atheists Will Hold Regional Conference in Puerto Rico
Browse Our Archives
What Are Your Thoughts?leave a comment