Why Are These South Carolina Politicians Arguing on Facebook Over an Appointee’s Rumored Atheism? April 17, 2014 Hemant Mehta

Why Are These South Carolina Politicians Arguing on Facebook Over an Appointee’s Rumored Atheism?

South Carolina Governor Nikki Haley and State Senator Katrina Shealy are both Republicans, which may explain a Facebook spat they’ve been having over Haley’s 2011 pick to lead the Department of Social Services, Lillian Koller.

Koller has been in the spotlight lately because lawmakers are investigating the DSS in light of stories of child abuse and neglect. Koller told a Senate committee yesterday that the DSS was doing everything in its power to fix the problem, though many of the politicians weren’t satisfied with her answers.

That’s what we should be focusing on, anyway, but the spat between Haley and Shealy began yesterday when Haley took to Facebook to show her support of Koller:

In response to one commenter saying, “Koller is an outspoken Atheist and not a fit for our state,” Haley responded back with a vehement denial:

That’s… a weird way to say she’s not an atheist. Like it’s a disease or something. It’s the same way some of President Obama‘s supporters give a nasty kneejerk response when members of the Tea Party say he’s a Muslim — it’s not enough to say it’s untrue; their responses suggest there would be something wrong with Obama if it were true.

Surely, if Koller were Jewish but “accused” of being Christian, Haley would’ve been a little more delicate in phrasing her rebuttal, don’t you think?

And why she Sen. Shealy get mentioned in the response?

She had recently approached Haley’s staff about a “rumor” that was going around regarding Koller’s beliefs — because we can have an atheist in public office now, can we?

After Haley mentioned her in that response, Shealy was pissed off and explained her own side of the story in a Facebook post that sounds more befitting a 12-year-old: 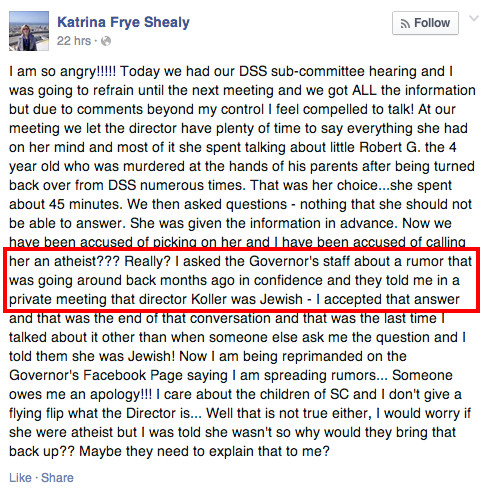 … Now we have been accused of picking on her and I have been accused of calling her an atheist??? Really? I asked the Governor’s staff about a rumor that was going around back months ago in confidence and they told me in a private meeting that director Koller was Jewish — I accepted that answer and that was the end of that conversation and that was the last time I talked about it other than when someone else ask me the question and I told them she was Jewish! Now I am being reprimanded on the Governor’s Facebook Page saying I am spreading rumors… Someone owes me an apology!!! I care about the children of SC and I don’t give a flying flip what the Director is… Well that is not true either, I would worry if she were atheist but I was told she wasn’t so why would they bring that back up?? Maybe they need to explain that to me?

That last bit is priceless: Shealy cares about the kids!… Unless the woman running DSS is godless, in which case, who gives a damn about the children.

Here’s what I want to know: Why would Koller’s atheism, if that turned out to be true, even be a problem? I want an answer to that. I want to know what Shealy thinks would happen if the health and safety of children were put in the hands of an atheist.

The only questions people should be asking about Koller are ones that concern how well she’s doing in her job. Her religious beliefs are simply irrelevant.

This is the sort of de facto discrimination that atheists have to put up with. And Koller isn’t even running for public office!

Shealy still won’t back off the religion thing, telling Buzzfeed that “[Koller] is Jewish from what I’ve been told. I can’t verify that one way or another.” Because if she can’t verify it, then something is horribly wrong!

It’s just pathetic. I’ve written to Shealy to ask what her concerns about Koller’s faith are and why she inquired about the “rumor” in the first place. I’ll let you know if she responds.

April 17, 2014
Woman Sought Religious Help After Sex Assault…and Priest Sexually Assaulted Her, She Says (During Exorcism, No Less)
Next Post

April 17, 2014 Actress Alicia Silverstone Joins the "Vaccinate Your Kids Only if You Feel Like It" Club
Browse Our Archives
What Are Your Thoughts?leave a comment