Actress Alicia Silverstone Joins the “Vaccinate Your Kids Only if You Feel Like It” Club April 17, 2014 Hemant Mehta

Following the leads of Jenny McCarthy, Mayim Bialik, and Kristin Cavallari, actress Alicia Silverstone (you remember her from Clueless) is jumping onboard the train of ignorant mothers who eschew vaccinations for their kids because they think they know better than the scientists.

In her new book The Kind Mama, Silverstone writes that vaccines are not necessary: 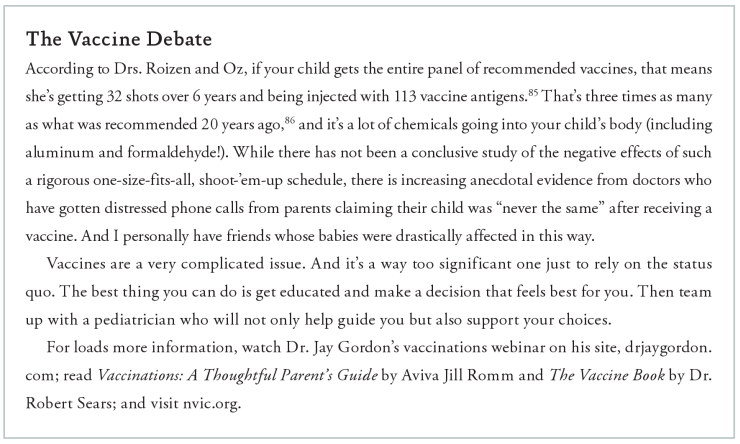 According to Drs. Roizen and Oz, if your child gets the entire panel of recommended vaccines, that means she’s getting 32 shots over 6 years and being injected with 113 vaccine antigens. That’s three times as many as what was recommended 20 years ago, and it’s a lot of chemicals going into your child’s body (including aluminum and formaldehyde!). While there has not been a conclusive study of the negative effects of such a rigorous one-size-fits-all, shoot-’em-up schedule, there is increasing anecdotal evidence from doctors who have gotten distressed phone calls from parents claiming their child was “never the same” after receiving a vaccine. And I personally have friends whose babies were drastically affected in this way.

Vaccines are a very complicated issue. And it’s a way too significant one just to rely on the status quo. The best thing you can do is get educated and make a decision that feels best for you. Then team up with a pediatrician who will no only help guide you but also support your choices.

So I guess Clueless is a pretty apt description…

“Anecdotal evidence” is an oxymoron. There has never been a statistically significant link found between vaccines and autism. Period. End of story. Just because your friend had something weird happen doesn’t mean the scientific establishment has it all wrong.

There’s more formaldehyde in a single apple than there is in a single vaccine. (Phil Plait wrote in Slate that vaccines “contain far too small a dose of any of these [toxins] to cause any of the problems [Jenny] McCarthy and other anti-vaxxers claim exist.”)

Vaccines are not “complicated” at all. It’s very simple, actually. Get your kids vaccinated. That’s it. They stay safe. We all stay safe.

Making a decision that “feels best for you” is fine… when it comes to furniture and your dinner plans. But no one should be working off their gut when it comes to preventing measles and whooping cough. It sounds powerful when someone tell you you’re doing that whole parenting thing right — You have good maternal instincts! — Still, it’s no excuse to put your child in harm’s way because you believe any nonsense a celebrity mom tells you.

And what sort of logic is there in deciding what the best medical route is for your child is and then finding a doctor who’ll confirm your beliefs? That’s absolutely the wrong way to pick a medical professional! What else does Silverstone advise? Wanna lose weight? Just gain 20 pounds and find a physical trainer who’ll tell you you’re doing it right!

The book’s title may be the biggest joke of all. “Kind mamas” don’t put their children — and other children — at risk because of unfounded, unscientific, unproven beliefs about what vaccines supposedly do. They listen to the experts, the vast majority of whom suggest you get your kids vaccinated.

What Silverstone is doing isn’t just wrong, it’s dangerous. Anyone interviewing her for this book, or going to one of her book signings, or writing a review about the book on Amazon should hold her feet to the fire over this issue. Don’t let her get away with saying this unscientific, harmful bullshit.

Think of the children.

That’s what responsible parents would do if they had a clue.

(via The Stir. Image via s_bukley / Shutterstock.com)

April 17, 2014
Why Are These South Carolina Politicians Arguing on Facebook Over an Appointee's Rumored Atheism?
Next Post