Doug Phillips, with his wife Beall, wrote the book on family values (OK, a book). It’s called Advanced Family Strategies. The publisher describes it as “A helpful, biblically-based idea-starter for your family.” 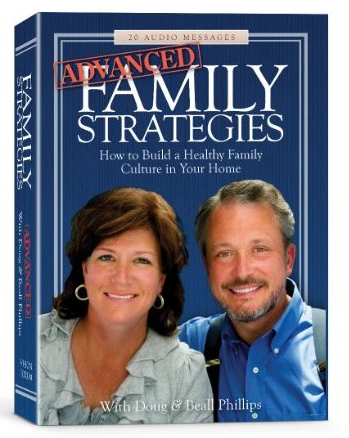 But it turns out that, if the allegations by one young women are true, you can learn lots more from Doug Phillips. Like how to dominate women in your employ, touch them inappropriately, and cajole them into sex.

First, a refresher about who he is:

Doug Phillips, a husband and father of eight children, had been a popular and controversial figure in the homeschooling movement and a leading advocate of “biblical patriarchy” before his resignation [for sexual impropriety] from Vision Forum Ministries and Boerne Christian Assembly, a Baptist church outside San Antonio, Texas, at which he had served as an elder and preached hundreds of sermons.

Phillips is also a friend and sometimes-counselor to Jim Bob and Michelle Duggar, and shares the Quiverfull approach to Christianity with them (where men have absolute dominion over women, birth control is evil, and so on). The Duggars, who have 19 children, are the stars of the TLC reality show 19 Kids and Counting (now in its eighth season).

The pastor has made a couple of appearances on this site. In 2008, he complained about Sarah Palin not being enough of a conservative and a True Christian™. A year later, he said some inadvertently funny stuff about the regrettable absence of God in science fiction.

Now he’s back in the news with something that isn’t quite so amusing: he’s accused of having groomed a teenager for submission and sex. Lourdes Torres, the object of his sexual attention, was the nanny for his children. She just filed a lawsuit against him.

In the complaint filed in Kendall County District Court in Texas Tuesday morning, Phillips is accused of using a woman named Lourdes Torres, now 29, as “a personal sex object” over a period of five years. …

Torres said she met Phillips and his wife, Beall, at a homeschooling conference in November 1999 when Torres was 15 years old. Torres spent many hours in the Phillips home, cared for their children and helped run the family farm. She was invited on trips with the family to Hawaii, Virginia, Mexico, Florida and other states.

The complaint alleges that Phillips

… “indoctrinate[d] [Torres] with the patriarchal mindset” and “subtly began to manipulate Ms. Torres, so that he could use her for his sexual gratification. This calculated, planned, and methodical grooming process went on for many years.”

Torres claims that during that time, her mentor, pastor, and employer repeatedly forced himself on her, and

Phillips’ lawyer, ready for a dirty war, says the touching didn’t lead to intercourse, was often initiated by the plaintiff, and adds that she

… repeatedly requested money, trips, jewelry, and numerous special favors from Doug Phillips. This relationship occurred well after Mrs. Lourdes Torres-Manteufel reached the age of majority, as has been confirmed by Mrs. Torres-Manteufel to have begun at the close of 2007.

Torres, recently married, has left Phillips’ sphere of influence, but not her faith. When asked about the lawsuit, Torres told WorldNet Daily,

“I just know it’s what the Lord wants, and I’m ready to move forward with it.”

Some of Phillips’ erstwhile colleagues hope he will never return to a Christian leadership position. Said one, Michael Farris of the Home School Legal Defense Association:

“Knowing Doug for 20 years, I’m confident he’s going to try to come back quickly. I’m also confident that would be an absolutely horrible outcome if he does.”

As a Christian, Phillips is automatically forgiven by his chosen deity, who sent his only son, yada yada.

A secular court, however, may not be so readily swayed.

April 16, 2014
How Carl Sagan Talked to His Daughter About Death
Next Post