New Study Shows That Even Atheists Think Atheists Are Immoral

Psychologist Will Gervais has done quite a bit of research involving the perception of atheists in society. In 2011, he and his colleague explained that people harbored anti-atheist sentiments in large part because they didn’t trust us. (Surprise!)

Gervais has just published his latest research in PLOS ONE showing, through a series of experiments, that atheism is virtually synonymous with immorality in the minds of many people. And the way he shows that link is deviously clever. 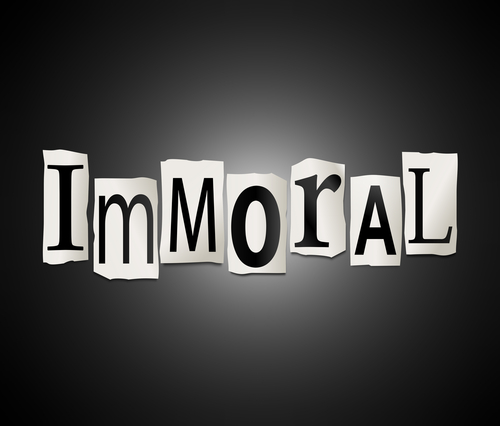 Here’s what he did for his first experiment: His subjects read the following fictional scenario:

When Dax was young, he began inflicting harm on animals. It started with just pulling the wings off flies, but eventually progressed to torturing squirrels and stray cats in his neighborhood.

As an adult, Dax found that he did not get much thrill from harming animals, so he began hurting people instead. He has killed 5 homeless people that he abducted from poor neighborhoods in his home city. Their dismembered bodies are currently buried in his basement.

Horrific. Awful. Disturbing. You get the idea.

Then Gervais asked the subjects what they could infer about Dax just from reading those two paragraphs.

They were given two options and asked which one was more likely: that Dax was A) a teacher or B) a teacher who does not believe in God.

Five other groups were asked to choose between A) a teacher and B) a teacher who was either Christian, Muslim, Hindu, Jewish, or Buddhist.

Now, the correct answer — 100% of the time, for every group — is always Option A. No matter what option B says, it is mathematically guaranteed that Dax is more likely to be a teacher than “a teacher and something else.” (This is commonly known as the “Linda problem” or “Conjunction fallacy.”)

So what did Gervais do with the results? He looked at how many people chose Option B in each group — the wrong answer every time — and calculated the error rates. 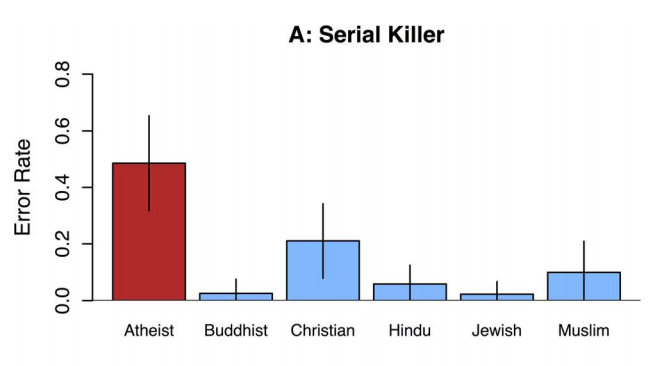 It’s incredible, though hardly surprising, that people felt it made sense to think someone who didn’t believe in God could be a serial killer.

In subsequent experiments, Gervais introduced situations where the character was involved in consensual incest or committed bestiality (with a chicken). Again, in both situations, the subjects were more likely to see a link when “atheism” was presented as Option B — even in the case when “atheist” was paired alongside different races instead of different religions: 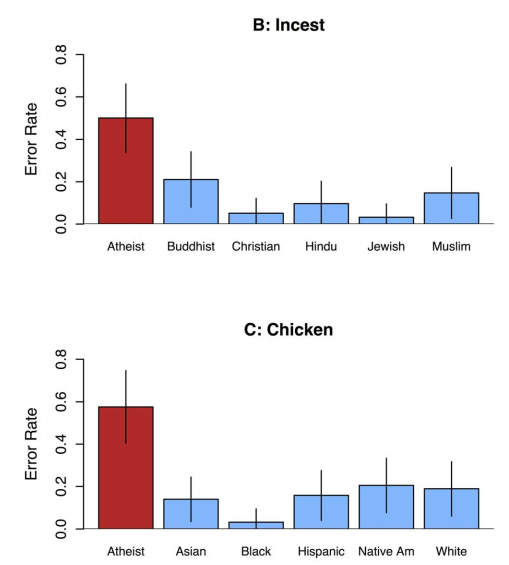 By the way, it’s interesting to note that even atheists were included in these numbers, meaning they, too, were linking immoral actions with atheism. Gervais wrote:

Even atheists seem to share the intuition that immoral acts are perpetrated by individuals who don’t believe in God. This suggests an intuitive association between morality and belief in God is not an exclusively religious intuition…

… if people readily and intuitively assume that the perpetrators of immoral acts are atheists, then this may generate group-level stereotypes of widespread atheist immorality, leading to distrust and disgust of atheists.

None of this is new information, obviously, We know that people think you need to believe in God to be good. It’s been a long-term battle (that’s still in progress) to overcome that stereotype, and atheist groups have challenged that thinking through volunteering and giving to charity. Clearly, though, we have a long way to go.

Before you criticize the methodology used here, I would also bring up another potential problem mentioned by reader GodVlogger. The name of the paper is “Everything Is Permitted? People Intuitively Judge Immorality as Representative of Atheists.” Intuitively? That makes it sound like our brains are hardwired to think poorly of atheists. I don’t believe that’s the case. Instead, our society teaches us that you can’t be good without God. It’s ingrained in our culture. In some cases, sure, atheists are outright vilified, but even if you don’t attend church, we’re constantly told that it’s a virtue to put our faith in a higher power. There’s nothing intuitive about that.