If Trends Continue, Christians Will Soon Dip Below 50% of the Population in Australia April 16, 2014 Hemant Mehta

If Trends Continue, Christians Will Soon Dip Below 50% of the Population in Australia

According to the Australian research firm Roy Morgan Research, by this time next year, non-Christians in the country may out-number Christians for the first time: 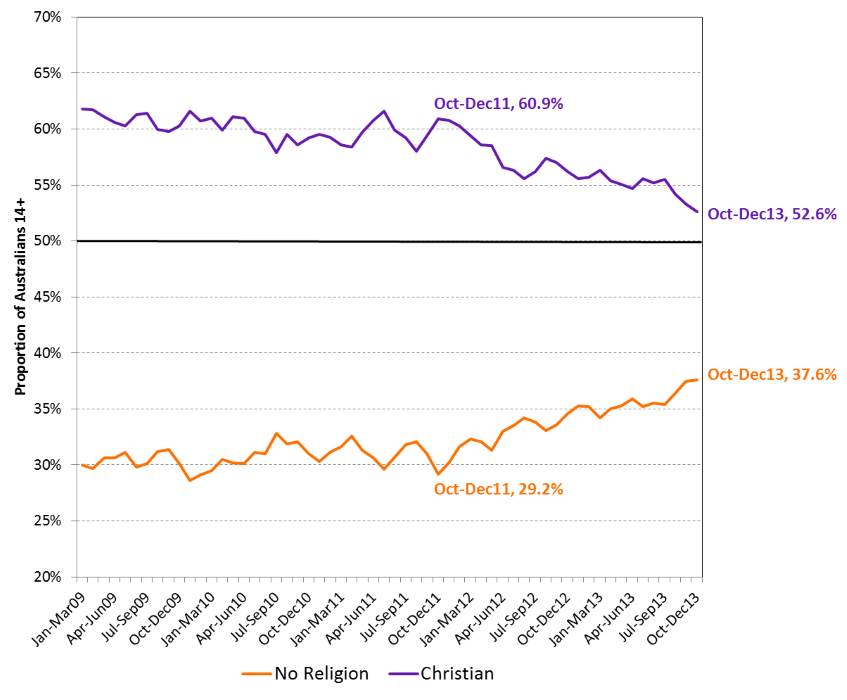 Easter Sunday may celebrate Christ rising, but the proportion of Australians who identify as Christian is falling fast, down over 8% points in the last two years. If the current downward trend were to continue, Christians will soon be in the minority in Australia, the latest research from Roy Morgan shows.

To be clear, the non-Christians still include those who may believe in the divinity of Jesus (or in God in general) but who don’t want to call themselves Christians because, to them, the word is tainted for whatever reason. But that’s a remarkable change, even in a country where an atheist was Prime Minister.

“… many factors could be contributing to the fall in the number of Christian adherents in Australia. For example, some morally conservative religious doctrines may be contrasting with progressive attitudes toward personal issues such as abortion, societal issues such as same-sex marriage, and global issues such as the use of condoms in the fight against the HIV pandemic.”

Not a surprise at all. At least in the cases of marriage equality and using condoms, younger Christians tend to see the light. The longer their church leaders remain bigots, the less likely they are to stay in the church. They may still revere the Bible, but even they feel embarrassed using the “C” word.

On a side note, as a math teacher, I guess I should point out that the research group’s headline isn’t *technically* accurate. It reads: “Christians in Australia nearing minority status as religious affiliation declines sharply since 2011.” But, as comedian Hari Kondabolu points out (in a different context), they’re assuming that all non-Christians are the same. We’re not. Christians in Australia will remain the largest religious group in the country whether they’re 52% or 48% or something even lower.

(Thanks to Zoe for the link!)

April 16, 2014
Why Coming Out as an Atheist May Be the Most Powerful Way to Combat Religion
Next Post