When It Comes to Hate Crimes, Atheist Victims Are Rare April 15, 2014 Hemant Mehta

When It Comes to Hate Crimes, Atheist Victims Are Rare

One of the most disheartening facts to come out of the shootings in Overland Park, Kansas, where a former KKK leader murdered three people at a Jewish community center, is that hate crimes against Jewish people are hardly uncommon.

In fact, notes Tobin Grant of Religion News Service, “Anti-Jewish hate crimes are the most common religious hate crime in the United States.” 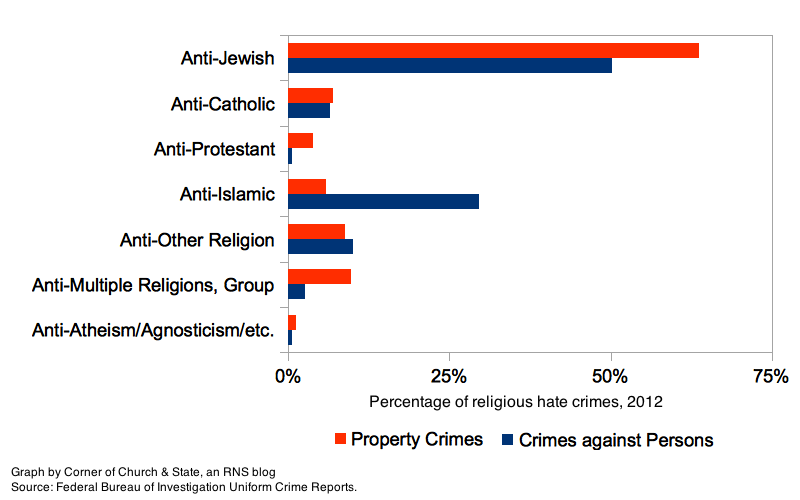 Obviously, any number is too high, but those results (from a 2012 FBI report) are surprising to me for a couple of reasons: I never would have predicted Jews would be the victims of hate crimes at a higher rate than Muslims. And I didn’t realize atheists were so rarely victimized.

In fact, the raw numbers note that anti-atheist/Agnostic hate crimes occurred only 12 times in 2012, compared to 674 anti-Jewish incidents in the same year. Of those 12 incidents, only two were assaults — the rest were crimes against property, like vandalism and burglary. (If you’re curious, Jews constitute about 1.7% of the country, while atheists and agnostics (combined) make up about 4%.)

It’s one reason we should be careful about using the word discrimination as it applies to us. In general, we’re pretty lucky. People may not want to vote for us and they may not trust us, but they don’t always want to be violent toward us, either. While there are certainly cases where outspoken atheists need bodyguards at public events or need to report threats to the authorities, it doesn’t happen any more than other groups. If anything, it happens less.

I should stress the obvious: this isn’t some sort of Biggest Martyr game. No one deserves to be at the receiving end of vandalism or physical violence because of his or her religious beliefs, no matter how much anyone disagrees with it.

But we can take away a lesson from all this: As part of a religious minority ourselves, it’s important that we aim our criticism at bad ideas, not necessarily the people who believe them. Other marginalized groups have it much worse than we do in the public eye and we don’t want to put those well-intentioned individuals in an even more vulnerable position.

That’s not to say proponents of false and harmful beliefs should go unchallenged, only that we should be cognizant of how our criticism may appear to unstable or hateful outsiders.

April 15, 2014 Microchips-For-Newborns Hoax Has Thousands of Christians Believing That the End Times Are Near... Again
Browse Our Archives
What Are Your Thoughts?leave a comment