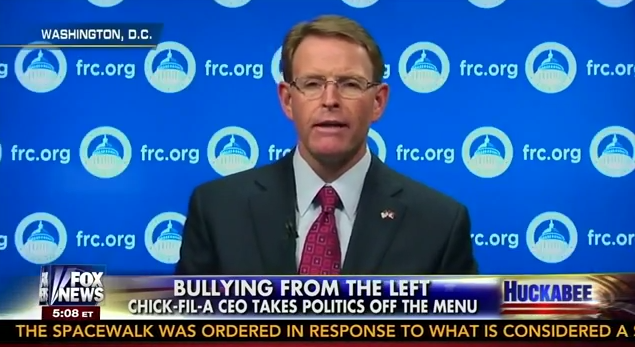 Huckabee: Tony, when I think about some of the people on the left, CEOs of places like Amazon, Starbucks, Apple computer, you know, I use their products but I don’t buy their politics… but it seems like the Left has decided that it’s not enough to have a different point of view. They want to shut down the view of others. Why is it that businesses would capitulate to the pressure and demands to just shut up and go away and not say anything when nobody is asking the Left to do that?

So Perkins agrees with Huckabee that nobody protests groups that lean toward the left and all we ever see are protests over anti-gay companies like Chick-fil-A and World Vision U.S.

Perkins may want to see a doctor about his memory problems since his group has initiated or promoted all sorts of boycotts against companies they don’t agree with.

Like Betty Crocker when they donated cakes to three newly-married gay couples in Minnesota:

At Betty Crocker, the only thing they’re mixing up is their priorities. Hello, I’m Tony Perkins with the Family Research Council in Washington… When you’re at the store, think outside the Betty Crocker box!

And the Girl Scouts for their alleged ties to Planned Parenthood and for not turning away transgender scouts:

Someone else has their hand in the Girl Scouts cookie jar–and it’s not who think. Hello, I’m Tony Perkins of the Family Research Council in Washington, D.C. There are plenty of politics behind that box of Thin Mints, and you should know what they are before you go buying one. As sweet as the girls are, a lot of that cookie dough goes to straight to the group’s political agenda. When they aren’t partnering with Planned Parenthood, they’re promoting sexual “diversity.” Last year, the Girl Scouts decided to admit boys who dress as girls — which shouldn’t come as a surprise, says FRC’s Cathy Ruse, since they have a cross-dresser in their front office. And that’s not all. “Earlier this month, a Girl Scout Employee… made the mistake of stopping by the office to do extra work on her own time in a T-shirt [that said] ‘Pray to End Abortion.’ A supervisor ordered her to turn the shirt inside out or leave the office. She left, for good.” So, says Cathy Ruse, should we all.

And Starbucks, after the company endorsed marriage equality in Washington state:

Siding with radical homosexuals has its price in this country. And in Starbucks case, the cost is about ten billion dollars. That’s how much the coffee giant’s lost in stock value since the campaign to Dump Starbucks got underway. In the last eight months, the company’s missed sales projections and watched stocks dive from $61 to $48, for a loss of more than $10.2 billion… there’s a reason to believe that alienating millions of customers will directly affect a company’s bottom line.

(Obviously, there’s no reason to believe the Dump Starbucks campaign had any negligible effect on the company’s finances, but that won’t stop Perkins from pretending his group had a hand in it.)

But the point is clear. Right-wing groups boycott left-leaning companies all the time. They have every right to do that, of course, but they sure as hell shouldn’t be able to get away with pretending their side is the only one facing pressure from those with opposing ideologies. Boycotts go both ways. (And for what it’s worth, their boycotts have failed miserably.)