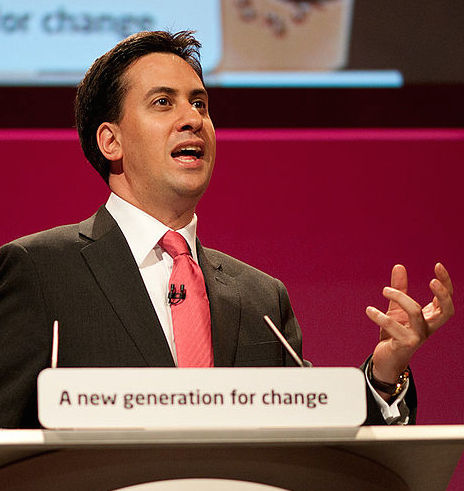 The UK’s Labour Party is out of power right now, and if it weren’t, perhaps its leader wouldn’t be able to say what he’s just said. Ed Miliband (right), Labour’s leader and would-be British Prime Minister if things go his party’s way, has admitted to being an atheist.

I have a particular faith. I describe myself as a Jewish atheist. I’m Jewish by birth origin and it’s a part of who I am… I don’t believe in God, but I think faith is a really, really important thing to a lot of people. It provides nourishment for lots of people.

Of course, we get the necessary hedge about faith being a good thing on the whole, which he’s politically required to say, just to make sure it doesn’t look like he hates religious people:

In terms of faith for me, it’s a faith about how you change the world. And that is actually true for a lot of religious people as well… [Faith has an] important place in society.

Notably, Miliband emphasizes to the Daily Mail that if he did ascend to the top job, he’d be the country’s “first Jewish prime minister.” And indeed, according to Wikipedia anyway, there have been at least three nonbelievers who have been Britain’s prime minister.

Miliband’s atheistic avowal is in stark contrast to a former Labour Party PM, Tony Blair, who made a frequent point of stickily wearing his faith on both sleeves. A few years ago when I wrote at Examiner.com, I noted a startling comparison Blair once made in a speech at Georgetown University after leaving office:

Blair stated that people of faith “face an aggressive secular attack from without” and “the threat of extremism from within,” and went further in making a rhetorical equivalency between nonbelievers and those who inflict harm and death in the name of their religion, saying:

Miliband also stands in stark contrast with his competition for the big office at 10 Downing, the current prime minister, Tory leader David Cameron, who has just recently begun making some theocratic noises (which is odd considering the secular character of UK politics and his coalition government with the Liberal Democrats, whose own leader is an atheist). Cameron recently said:

I think there’s something of a [Christian] fightback going on, and we should welcome that. The values of the Bible, the values of Christianity, are the values that we need.

So this could get interesting. The UK isn’t so hung up on religion vs. irreligion as we are in the States, but it’s also not usual for such an enormous theological gap to exist between the two rival leaders. I don’t expect it to become a defining issue, but I’d bet on it becoming at least somewhat significant.

April 14, 2014
There Are No Errors in the Bible, Says Christian Pastor Who Clearly Hasn't Read the Bible
Next Post

April 14, 2014 Satan as a Mashup: Today's Devil Combines Zoroastrianism, Greek Mythology, and Lots of Artistic License
Browse Our Archives
What Are Your Thoughts?leave a comment