The satan of the Old Testament was merely a not-especially-powerful angel in God’s employ, tasked with correcting and disciplining sinners.

A millennium or two later, that supernatural being had morphed into humankind’s most-feared enemy — so evil, cunning, and potent that he could outwit the Creator Himself. The devil tempted and tricked mortals into sin and ruled over a fiery underworld where his helpers gleefully tortured those who had transgressed against the will of the Almighty. 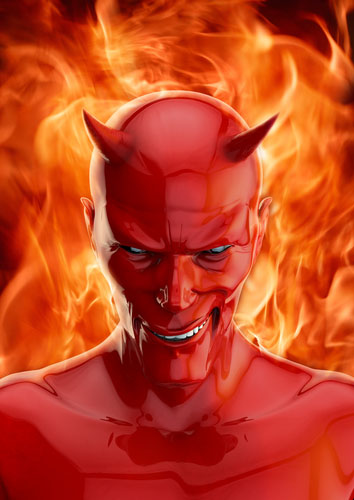 How did that remarkable transformation come about? Paul Gallagher has an interesting write-up on that at Dangerous Minds:

A 6th-century mosaic of the last judgement in Ravenna, in the Basilica of Sant’Apollinare Nuovo, Italy, clearly shows Jesus flanked on the right by an angel of light, in red; and on the left by an angel of dark, in blue. This is the Devil, who was seen in early medieval times as little more than a low-ranking bureaucrat, who was working for God.

Gradually, as the Catholic/Christian religion extended its power, the Devil began to take on a more sinister form. The blue angel sprouted horns, and slightly resembled a dragon. Interestingly, Hell at this time was not yet the fiery furnace it is depicted as today, the river of flames would be first painted with the last judgment mural at Torcello Cathedral in Venice, produced during the 11th century

The Devil slowly changed color to red, and took on elements from other mythical gods and creatures: firstly Hades, the Greek god of the underworld, and then another Greek god Pan, who was originally the god of shepherds. (His name meant “to pasture.”) It was Pan who gave the Devil his goat’s legs and cloven hooves. Our vision of the Christian Devil owes more to artists than it does to any descriptive verse in the Bible.

Back in 2007, a team of Welsh documentary makers, in association with SBS Australia, put together a lo-fi but entertaining and enlightening look at the history of the devil. Recommended.

As we saw in a survey last year, 50 to 60 percent of Americans believe that the devil is real.