Cameroon Government Is Closing Churches That Are ‘Harmful to Society’ April 14, 2014 Terry Firma

Cameroon Government Is Closing Churches That Are ‘Harmful to Society’ 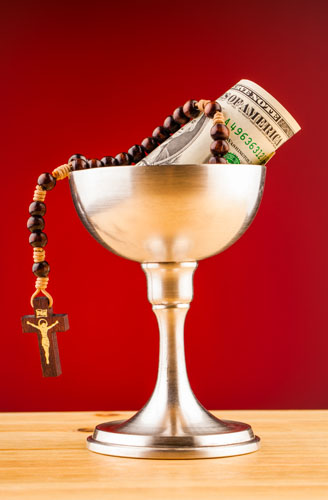 On a recent Sunday service at a Cameroonian branch of a Nigerian mega-church known as Winners’ Chapel, hundreds of people listen to members testify about how God has blessed them with material riches and job promotions.

Miraculous ways and all that.

[One] woman says she wondered why she always had to drive a rundown car compared to everyone else’s. She says that after much prayer, God blessed her with a new Nissan.

After the testimonies, young ushers in pressed suits crisscrossed the large concrete building collecting offerings from the congregation.

Caballero says that there are more than 500 revival churches in Cameroon,

… but fewer than 50 are legally registered. Their rapid growth, as well as what the government views as questionable practices, has drawn attention. Last year, the government ordered the closure of nearly 100 churches. …

Cameroon’s minister of communication, Issa Tchiroma Bakary, says these revival churches not only disturb neighbors with loud services, they rip off vulnerable people. Some pastors, he says, engage in criminal practices such as extortion. The government decided to close them, he says, wherever their presence becomes harmful to society.

However, in a dance of dueling corruption, police officers sometimes allow the illegal churches to remain open in exchange for a bribe.

It’s hard to know who the biggest crooks are, but I’m leaning toward the quasi-pious conmen who take advantage of desperate or foolish people by selling them something that costs nothing and cannot be seen.

Come to think of it, that latter part is pretty much the definition of religion.

April 14, 2014
Is Jenny McCarthy Really Pro-Vaccines? (Spoiler: No)
Next Post