This past week, Iowa Governor Terry Branstad signed a proclamation that calls on all Iowans to embrace Christianity according to a specific Bible verse: 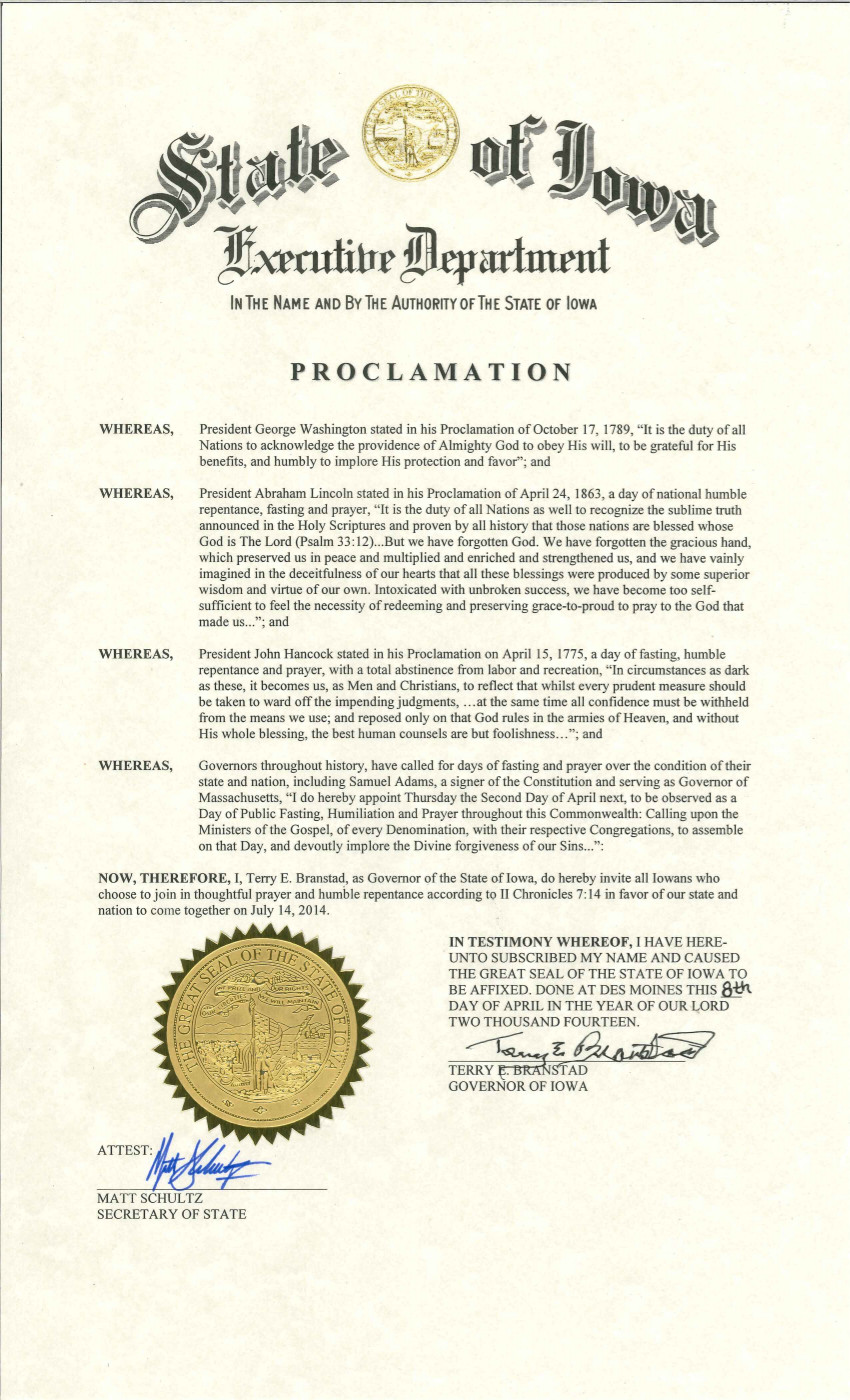 The proclamation was suggested by a Christian group called “Prayer 7-14-14,” which references the date they plan to celebrate the Bible verse 2 Chronicles 7:14, where God states,

if my people, who are called by my name, will humble themselves and pray and seek my face and turn from their wicked ways, then I will hear from heaven, and I will forgive their sin and will heal their land.

(Incidentally, 2 Chronicles 7:5 involves the gruesome slaughter of 142,000 animals, and 2 Chronicles 7:19-22 involves God telling us how he’s going to destroy a temple if people don’t embrace him… but, you know, Free Will something something. Let’s just ignore all that and focus on the single passage.)

This proclamation was for Jesus Followers, by Jesus Followers. And if you don’t follow Jesus, well, you damn well better start. Just look at the requesting group’s website if you dare… it tells you how, for the sake of our nation, we must come together to honor the Christian God.

Governor Branstad could’ve saved time by just turning to the TV cameras and saying, “Hey, Jews, Muslims, Atheists, Hindus, and all other non-Christians: Screw you.”

Instead, he used slightly more positive language in the actual proclamation:

NOW, THEREFORE, I, Terry E Branstad, as Governor of the State of Iowa, do hereby invite all Iowans who choose to join in the thoughtful prayer and humble repentance according to II Chronicles 7:14 in favor of our state and nation to come together on July 14, 2014.

Yes, we can all unite as one… under Christ.

For the sake of argument, haven’t governors and mayors signed proclamations for secular events like the Day of Reason or Darwin Day? Absolutely. Last December, the governor of Massachusetts even signed a proclamation marking Humanist Community Day. I would argue, however, that all these proclamations are not equivalent. The Humanist Community Day proclamation referenced a specific group and specific event — it never suggested all citizens should embrace Humanism. The other kinds of proclamations honored things like science and critical thinking which apply to everybody, even if everybody isn’t non-religious. I would be opposed to any government-endorsed proclamation that encouraged citizens to shed their faith for the betterment of the nation.

But adopting Christianity for the same reason? I guess that’s perfectly fine. The proclamation Branstad signed invites all Iowans to turn from their “wicked ways” (if you read the Bible verse, anyway) and embrace Christianity as the Good Book dictates.

No governor who truly cares about unifying his/her state would have signed this. So it’s hardly surprising that a Republican governor finally did.

Note: The proclamation refers to John Hancock as “President.” As Jeremy Hooper points out, that’s presumably a reference to his role in the Second Continental Congress… but very confusing nonetheless. Also, it refers to a proclamation honoring God that President George Washington made on October 17, 1789. Actually, that “Thanksgiving Proclamation” was signed on October 3 of that year. But why proofread when you have Jesus on your side?

(via AKSARBENT. Thanks to Richard for the link)

April 13, 2014
500 Years After the Inquisition, Spanish Village Called 'Kill the Jews' Will Be Changing its Name — Maybe
Next Post