The Overt Christianity on Clemson University’s Football Team

In September of 2012, Jeff Scott, an assistant coach for Clemson University’s football team, tweeted a picture of a player getting baptized, surrounded by his teammates: 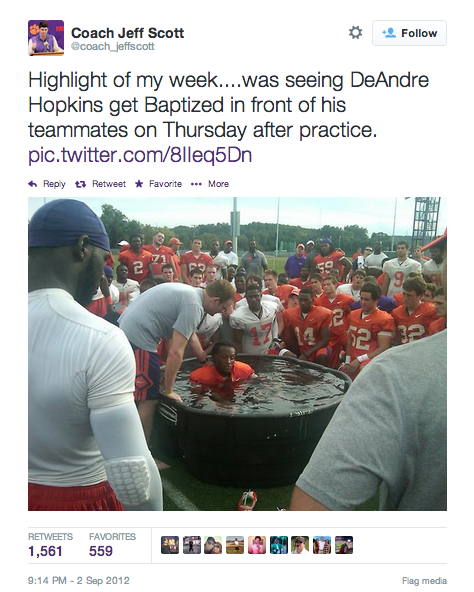 Considering this tweet came from a coach’s Twitter account, showed players in their uniforms, and seemed to take place on a school-owned practice field, you could make a strong case for how it was inappropriate.

Now, there’s evidence — lots of it — that this wasn’t just some one-off event. In fact, Clemson football is virtually intertwined with the promotion of Christianity and the Freedom From Religion Foundation has the details to prove it.

Perhaps spurred by this article in The Chronicle of Higher Education, FFRF filed a Freedom of Information Act (FOIA) request with the public university last year and received the requested documents in February. What did those records show?

Head Coach Dabo Swinney invited Rev. James Trapp to become the team’s official chaplain in 2011, something the school itself says he can’t do (though student groups are allowed to select a chaplain for themselves):

Trapp, who took that job, held Bible studies for the team between drills, had an office in the school’s athletics center, and led sessions on “being baptized” in that office — something he was prohibited from doing as a paid state employee.

Then, it got worse. Here’s FFRF attorney Patrick Elliott:

… it is our further understanding that:

Coach Swinney confirmed that the entire Football team would attend [a Fellowship of Christian Athletes] breakfast on December 31, 2011 wherein three players would “testify.”

Coach Swinney schedules devotional for the football team. Between March 2012 and April 2013, approximately 87 devotionals were organized by James Trapp, approved by [Coach] Swinney and [led] by university coaching staff.

Keep in mind that, even if these activities were all optional, the pressure for players to pray must have been incredible. If the coach values Christianity that highly, then saying you’re a non-Christian (much less an atheist) could impact your playing time and subsequently your career in the sport. Swinney says the only discriminating he does is based on talent, not beliefs, but that’s just a reflection of his own ignorance: Who knows how many players are just following the crowd so they don’t get on his bad side?

There’s a reason we can name more openly gay college football players than openly non-religious ones. It’s because sports isn’t the only kind of religion practiced at these public schools.

There’s nothing stopping Clemson players and coaches from attending worship services, forming a Bible study, and getting baptized on their own time. But this football team is a substitute church right now and the university is playing with fire if they don’t put a stop to it.

FFRF is asking Clemson to immediately stop the proselytizing, train the coaching staff appropriately, and monitor their conduct going forward. That’s all. Considering what a lawsuit would cost the school, they should be breathing a sigh of relief that they got off the hook that easily.

April 12, 2014
Virginia Delegate Who Claimed Disabled Children Are God's Punishment for Abortion Is Running For Congress
Next Post