What Does the ‘Gospel of Jesus’s Wife’ Papyrus Tell Us?

When Harvard Divinity School professor Karen King announced in 2012 that a 2nd century fragment of papyrus containing the words “Jesus said to them, ‘My wife…’” had been found, speculation was rampant. Was Jesus really married? Would that change Catholic doctrine preventing priests from marrying? Who officiated that wedding? You get the idea. (The papyrus also supposedly quoted Jesus as saying “she will be able to be my disciple.”) 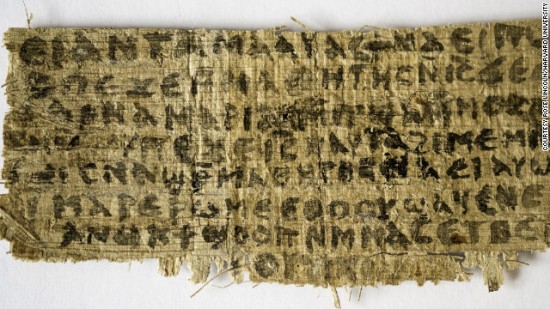 At the time, King and her colleagues were quick to point out we didn’t actually know anything:

“This fragment, this new piece of papyrus evidence, does not prove that (Jesus) was married, nor does it prove that he was not married. The earliest reliable historical tradition is completely silent on that. So we’re in the same position we were before it was found. We don’t know if he was married or not,” King said in a conference call with reporters.

Yesterday, news broke that the “ink and papyrus are very likely ancient, and not a modern forgery.”

What does that mean?

The test results do not prove that Jesus had a wife or disciples who were women, only that the fragment is more likely a snippet from an ancient manuscript than a fake, the scholars agree. [King] has said all along that it should not be regarded as evidence that Jesus married, only that early Christians were actively discussing celibacy, sex, marriage and discipleship.

Anyone who tells you they know what the papyrus means is lying to you. It’s too little information from which to base any theories.

That said, it is pretty funny to see some Christians dismissing the papyrus outright because it doesn’t align with their image of Jesus. If the papyrus said Jesus was crucified and rose again, does anyone doubt those same people would be pointing to the ancient writing and screaming, “SEE?! I TOLD YOU!”

Needless to say, whether the papyrus is real or not, the whole story at least shines a light on the treatment of women in many faiths. To base entire traditions around the idea that women can’t be priests or must remain silent within church walls has always been ridiculous. That some of it may have happened due to missing, ignored, or hidden information is stunning.

April 11, 2014
Ohio Mayor Puts Large Crosses Back Up on City Building Because, He Says, "I'm Allowed To" During the Month of Easter
Next Post

April 11, 2014 U.S. Dept. of Justice to Supreme Court: If Mount Soledad Cross is Ruled Unconstitutional, We Will Defend It
Browse Our Archives
What Are Your Thoughts?leave a comment