Pseudohistorian David Barton Cites Bible Passage About Driving Out Demons as Inspiration for the U.S. Constitution

The team at Right Wing Watch has a game going on where they just watch every speech given by Christian pseudohistorian David Barton just to see what new lies he’ll tell next. The most recent one is so far-fetched, it’s amazing that even his already-gullible audiences haven’t called him out on it yet.

In a speech given at the Victory Christian Center in Austin, Texas last month, Barton explained how the Founding Fathers cited the Bible, specifically Luke 11:20, as the reason we have a written Constitution in our country. 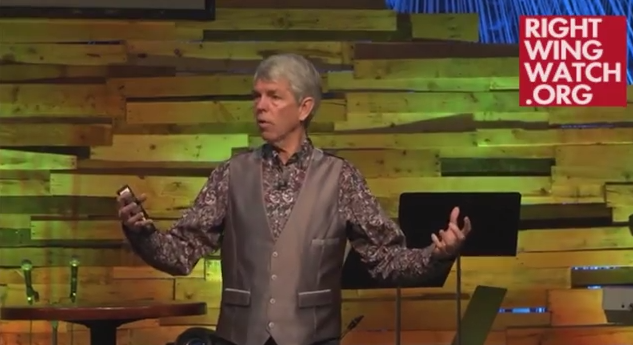 RWW’s Kyle Mantyla went back through one of Barton’s books to see what citation he offered for that claim… and, surprise, there is none. There are only the words of Hamilton:

“For my part, I sincerely esteem it a system which, without the finger of God, never could have been suggested and agreed upon by such a diversity of interests.”

But if you take a look at Luke 11:20, you realize that there’s just no way Hamilton and Madison got their ideas about the Constitution from there:

But if I drive out demons by the finger of God, then the kingdom of God has come upon you.

That’s it. That’s the famed verse. Even in context, you have to win a gold medal in mental gymnastics to see even the loosest of connections as to how that sentence ties in to the Constitution.

How Barton concludes that the United States has a written Constitution because of one phrase in the book of Luke about casting out demons and which has nothing to do with writing or constitutions or government whatsoever is anybody’s guess.

Barton’s claims are nonsense and his scholarship is laughable, but he will continue to spread his misinformation all over this nation to gullible audiences of conservative Christians who are so eager to embrace Barton’s message and worldview that they can’t be bothered to hold him accountable for his relentless dishonesty.

That’s Barton and his audiences for you: A liar and people who swallow those lies without question. It’s a perfect partnership. That is, unless you care about honesty or integrity or ethics… which Barton clearly stopped caring about a long time ago.

April 10, 2014
Dave Silverman: 'For the First Time in My Life, I Am Ashamed of My Association with Brandeis University'
Next Post

April 10, 2014 God, Too, is Subject to Forces of Evolution
Browse Our Archives
What Are Your Thoughts?leave a comment