UK Government Official: ‘We’re a Christian Nation… Get Over It’ April 8, 2014 Hemant Mehta

UK Government Official: ‘We’re a Christian Nation… Get Over It’

Over the weekend, Eric Pickles (below), the Secretary of State for Communities and Local Government in the UK, made a remarkable claim in London: 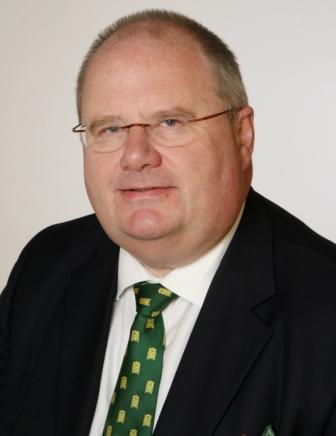 “I’ve stopped an attempt by militant atheists to ban councils having prayers at the start of meetings if they wish,” said Pickles. “Heaven forbid. We’re a Christian nation. We have an established church. Get over it. And don’t impose your politically correct intolerance on others.

Pickles rewrote the laws in 2012 to ban lawsuits against parish councils for their public prayers (though the National Secular Society begs to differ on his impact).

So it’s intolerant when “militant atheists” (which means what, exactly?) attempt to keep a government meeting neutral, but imposing religious prayers at those meetings is somehow inclusive?

Non-theistic groups in the region are already weighing in on the matter, holding very little back.

Paul Sims of the UK-based Rationalist Association is trying to make sense of Pickles’ outrageous statement:

Considering that Pickles is the Secretary of State for Communities and Local Government, a portfolio that implies an awareness of issues like community cohesion and diversity, this is a fairly bizarre and, you might argue, divisive position to take.

… Even if we accept the Census results and acknowledge that 59 per cent of Britons are Christian (whether loosely or strongly affiliated), do we really want to see Government ministers, particularly the Secretary of State for Communities, telling people to just “get over it” and accept that Britain is a Christian country? At best, it’s inconsistent position — for someone accusing others of intolerance, Pickles seems pretty keen on shutting down debate.

The Minister’s views are deeply misguided and he is simply incorrect — only a minority of people in Britain are practising Christians and over half of the population sees itself as non-religious according to repeated surveys. Although Christianity has undoubtedly had an influence on the cultural and social development of Britain, it is far from being the only influence. Many pre-Christian, non-Christian, and post-Christian forces have shaped our society for the better and Christianity has often had ill effects. So, on a purely factual level Eric Pickles remarks are simply untrue.

Mr Pickles’ seems to be taking the Alice in Wonderland approach to the law, as to paraphrase Humpty Dumpty “the law means what I want it to mean”.

The NSS has told Mr Pickles repeatedly that he is misrepresenting the facts of this case and yet he continues to do it. We never said that all prayers in Town Halls should be banned. We simply said that it shouldn’t be part of official business so that everyone, Christian, Muslim, Buddhist, Jew, atheist or anyone else, could take part in good conscience and without intimidation.

Many councils now have prayers before the meeting agenda begins, and we have no objection to that.

So far, Pickles has not offered anything resembling an apology. I wouldn’t expect one, either.

April 8, 2014 New Documentary, Narrated by Star Trek's Kate Mulgrew and With Atheist Interviewees, Says the Sun Circles the Earth
Browse Our Archives
What Are Your Thoughts?leave a comment