The Judge Whose Decision Led to Town of Greece v. Galloway Expounds on the Establishment Clause April 8, 2014 Hemant Mehta

The Judge Whose Decision Led to Town of Greece v. Galloway Expounds on the Establishment Clause

As we wait for the Supreme Court to rule in Town of Greece v. Galloway, the case involving public prayers at government functions, let’s recall what Judge Guido Calabresi (below) wrote for the United States 2nd Circuit Court of Appeals in May of 2012. The panel said at the time that the sectarian prayers in Greece, New York were unconstitutional: 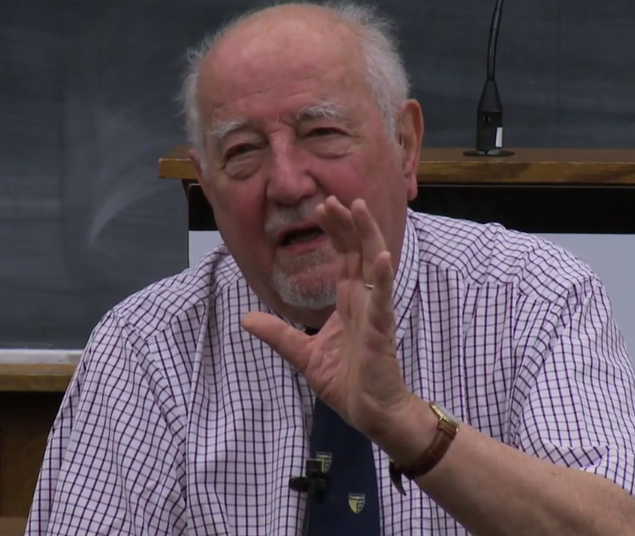 We conclude, on the record before us, that the town’s prayer practice must be viewed as an endorsement of a particular religious viewpoint. This conclusion is supported by several considerations, including the prayer-giver selection process, the content of the prayers, and the contextual actions (and inactions) of prayer-givers and town officials. We emphasize that, in reaching this conclusion, we do not rely on any single aspect of the town’s prayer practice, but rather on the totality of the circumstances present in this case.

Calabresi, however, doesn’t think the media has characterized his argument properly. It’s not that he’s against prayer; it’s actually much more complicated than that. In an interview with Marie Griffith at Religion & Politics, he elaborated on that idea:

Much of the press on this case acted as if our answer was no; our case says the opposite. It says absolutely! What we are asking is: how can you do that without defining a town as being Christian, Judeo-Christian, Abrahamic? And that is a very difficult issue.

… We took the position that a non-sectarian prayer is either a contradiction in terms or is an establishment. It is an establishment of the “okay” religions. Of “what we are all agreed on.” What we wanted to do was to find a way of allowing people to pray without having a town define itself as Christian…

In other words, Calabresi doesn’t have a problem with sectarian prayers — are there really any other kind? — as long as everyone has the opportunity to deliver them, including atheists.

He obviously has the legal training here — I don’t — but opening the door to invocations in the first place still strikes me as an awful idea. When you think about all the potential problems that could occur (and have occurred) and considering how there’s no reason such prayers can’t be said before a meeting, the only reason to include them at a public meeting is to give the majority faith a chance to establish its hegemony.

Calabresi has an ideal in his mind that virtually no city council or state legislature has ever achieved. That’s why the Supreme Court should just do away with invocations altogether. They won’t, of course, but that decision wouldn’t be pro-atheist at all. It would be a high mark of neutrality. It would send a message that everyone can pray as they choose in advance of a meting — but when the government gets down to business, no one religious belief should take precedent.

April 8, 2014
Dutch Jesuit and Humanitarian Who Made Syria His Home Is Murdered in Cold Blood; Islamist Rebels Suspected
Next Post