Dutch Jesuit and Humanitarian Who Made Syria His Home Is Murdered in Cold Blood; Islamist Rebels Suspected April 8, 2014 Terry Firma

Dutch Jesuit and Humanitarian Who Made Syria His Home Is Murdered in Cold Blood; Islamist Rebels Suspected

When the Dutch Jesuit priest Frans van der Lugt turned 65, about a decade ago, he could have returned to his birth country and lived out his days in comfortable retirement. But van der Lugt chose to stay in the civil-war-ravaged city that had grown dear to him: Homs, Syria.

Eight weeks ago, The Economist had this to say about him:

A trained psychotherapist who is now in his 70s, he has been living in the Middle East since 1966. In the 1980s he set up an agricultural project outside Homs where young people with mental health problems could work. At an earlier stage in the current war, many Christians left the city after rebel forces moved in; he chose to stay, telling objectors that “I am the shepherd of my flock”. He is said to be the last European living in the heart of the city, now besieged by government forces. 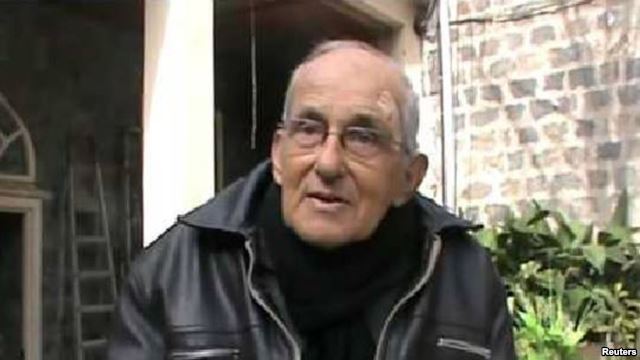 In a documentary to be shown by a Dutch TV channel this week, the courageous Jesuit’s friends and family speak of their fears for his life and their respect for the defiant choices he has made.

The Rev. Frans van der Lugt, a Dutch Jesuit priest who became a symbol of suffering and compassion in the war-ravaged Old City district of Homs, Syria, was shot to death Monday morning by a lone gunman, according to members of his order. The killing came amid growing disputes between Syrian insurgents blockaded in the Old City — those who want to accept an amnesty from the government in exchange for laying down their arms, and those who do not.

After Syrian government forces isolated and laid siege to the rebel-held Old City for more than a year, a truce in January allowed the evacuation of 1,500 people, both civilians and fighters. But Father Frans, as he was known, insisted on remaining in the monastery where he had lived for decades, offering refuge to Muslim and Christian families alike and sharing their deprivation and trauma.

The Wall Street Journal adds that

It wasn’t immediately clear who was behind the killing of Father Frans van der Lugt on Monday. But Christians in predominantly Muslim Syria in the past have come under attack by extremist rebel factions, especially those tied to al Qaeda.

Syrian priests and a Muslim cleric close to Father Frans said a masked gunman stormed into his monastery in the old quarter of the central city of Homs and told the priest to accompany him.

When he refused, the gunman ordered him to sit on a chair and then shot him twice in the head.

Dutch media are reporting that the priest was targeted by Islamist rebel fighters for Al-Nusra, a terrorist group closely aligned to Al-Qaeda. The motive might have been that President Assad‘s wife once paid a courtesy visit to the Homs agricultural project that van der Lugt had started to help feed the now-beleaguered city.

(Thanks to Nico for the tip)