But one of their programs featuring live animals made the rounds online because of a disclaimer that appeared on a promotional poster: 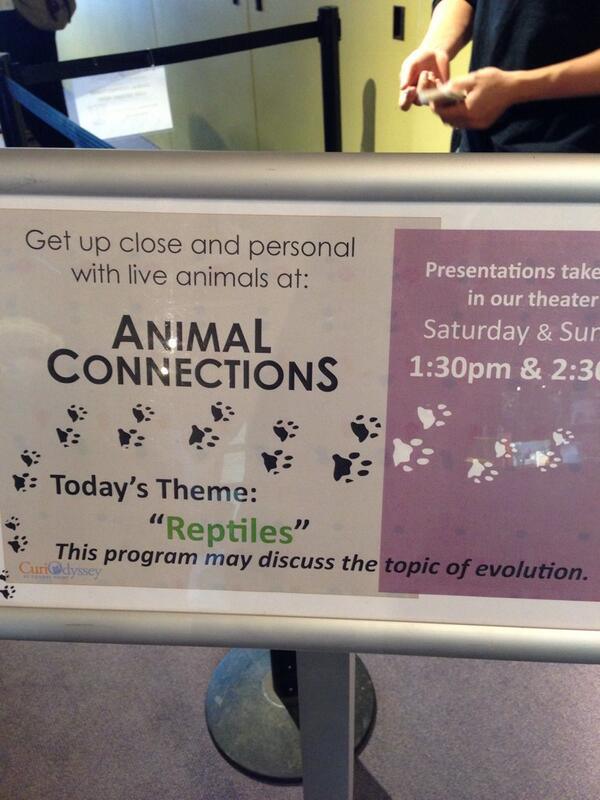 This program may discuss the topic of evolution.

It’s like a warning sign… But for whom? Did someone attend the program, hear the “E” word come up, and go, “Oh shit! I didn’t know this was that kind of museum!”?

Since when does a science museum need to warn people that a science presentation will include science?

Jerry Coyne, appalled by the disclaimer, sent the museum an excellent letter explaining why the warning wasn’t just unnecessary, but harmful:

If that addition about the “e-word” is indeed a warning to prospective visitors, it seems unnecessary. I don’t see why an organization like yours, which is so admirable in its dedication to educating children about science, needs to warn them off one of the most amazing discoveries of modern science. Of course some parents (or their children) might have religiously-based objections to evolution, but I also think there’s no need for science education centers to cater to such sentiments. Evolution happens to be true, and people need to learn about it. Making it seem “scary” in this way only adds to the bad feelings people have about such a marvelous view of life, and deprives children of a proper grounding in biology.

Earlier today, I spoke with a representative from the museum and she told me that CuriOdyssey would no longer be including the disclaimer on their poster thanks to feedback they’ve received.

But why was it on there in the first place? I asked.

She wasn’t sure. And because the museum is closed on Mondays, she wasn’t able to put me in touch with a staff member would could answer that, but she said the museum would get back in touch with me by tomorrow. I’ll provide an update if/when I hear back.

***Update***: The museum just called back to explain their reasoning for why they put the disclaimer there.

In short, yes, there were religious visitors to the museum who were surprised to hear evolution mentioned in some of the presentations. Because evolution didn’t “align with their personal beliefs,” the museum thought it would be helpful to offer the warning. But after hearing feedback from science advocates, they decided the disclaimer didn’t align with their mission and they will no longer be including it on any promotional materials.

April 7, 2014
Christian Couple in Pakistan is Sentenced to Death For Blasphemy Against Islam
Next Post