Here’s what you need to know about Sherman Alexie‘s novel The Absolutely True Diary of a Part-Time Indian:

It’s won a ridiculous number of prestigious awards since being published in 2007.

Every kid you know who’s read it has loved it.

A couple of parents in Idaho have convinced a local school board — representing the largest school district in the state — to remove the book from its curriculum because it’s too “obscene” for them.

Bonnie Stiles, mother of four students in Meridian schools, said she pushed for the removal from the high school curriculum after reading the book and counting 133 profane or offensive words in its 230 pages.

“There’s obscene material throughout, degrading slang words like the one used to describe a certain part of a woman’s anatomy and an offensive depiction of (Jesus Christ),” she said.

So, Stiles “read” the book, yet failed to pick up on the broader story and takeaway lessons. All she did was keep a tally mark of the naughty words. Which is really the mature way to read a book…

She wasn’t alone in her whining, either. Grandparent Sharon Blair voiced the initial complaint and told the school board:

“You have them as teachers for a small part of the day. We have them for a lifetime, and I do not want our children exposed to explicit, filthy, racist things.“

By that logic, I guess Blair doesn’t want her kids to learn about U.S. History either, since our past (and present) is full of racism. Obviously context matters — and Alexie’s book doesn’t include bad words just for the hell of it. He’s depicting characters who think and talk that way. It’d be disingenuous to pretend otherwise.

I’d be much more worried if my kids had to put up with someone like Blair than if they had to read a challenging book.

That reference to Jesus that Stiles was so worked up about, by the way, occurs after a character (Eugene) dies. The father of Arnold, the main character, grieves by drinking. Arnold’s mother grieves by going to church. And Arnold is just mad at God for letting all this happen: 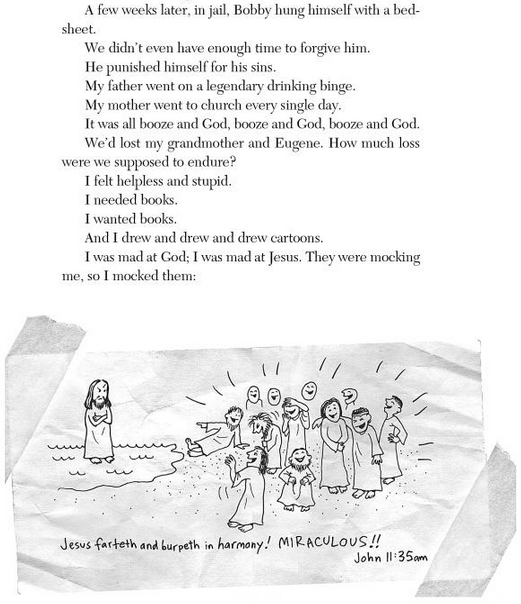 If you’re Bonnie Stiles or Sharon Blair, you see that as an “offensive depiction” of Jesus.

If you’re anyone else, you see that as a normal human emotion: getting angry and upset when life doesn’t seem fair. (And as far as acting out goes, a silly drawing is hardly that bad.) Any teenager reading the book would understand that.

As if that weren’t enough, no one was even forcing their kids to read the book. It was just one of five options sophomore could choose for a required reading assignment. Which means Stiles and Blair didn’t just want their own kids not to read the book; they wanted to make sure no one else could read it for credit, either.

I hope no one tells them about Catcher in the Rye. Or The Perks of Being a Wallflower. Or Speak. Or the Bible, with its gratuitous violence and rape scenes. Oh! And make sure their kids never go on the Internet. Or go outside in public spaces.

After hearing from parents like Stiles and Blair and then from sensible people who oppose censorship, the school board still unfortunately voted 2-1 to remove the book from the curriculum… at least until the district can undertake a review of the items on its Supplemental Reading List. In other words, they’re delaying making a decision that should have been ridiculously easy. It was the coward’s way out.

I would love to see students read the book, anyway, even if they’re not getting credit for it — just to show that they’re not going to let some uptight parents control what they can and can’t read. It would be a wonderful way to protest their school board’s capitulation to overbearing critics who don’t think other peoples’ kids should be exposed to excellent, challenging, real literature.

April 6, 2014
America's Most Important Defender of Evolution May Be This Catholic
Next Post