After Negative Feedback, Chili’s Will Not Be Donating 10% of Customers’ Checks to Anti-Vaccine Group Tomorrow April 6, 2014 Hemant Mehta

After Negative Feedback, Chili’s Will Not Be Donating 10% of Customers’ Checks to Anti-Vaccine Group Tomorrow

Chili’s Grill & Bar was planning to host a nationwide fundraiser tomorrow night in which a portion of all proceeds would be given to the National Autism Association. That sounds all well and good until you take a look at the NAA’s website, specifically the page listing the causes of autism.

For no good reason — certainly, no scientific reason — the list includes “Vaccines”:

For that reason, spurred by popular websites reporting on it, people began complaining about Chili’s on various social media networks.

It’s entirely possible (hell, it’s very probable) Chili’s had no idea supporting the NAA would be controversial — they just figured they were helping a good cause — but to their credit, they’ve just announced that they will no longer be giving any money to the anti-vaxxer organization: 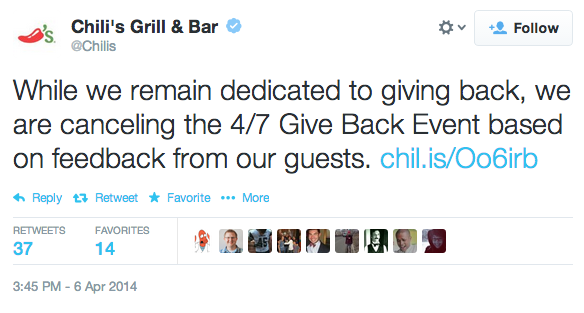 Chili’s is committed to giving back to the communities in which our guests live and work through local and national Give Back Events. While we remain committed to supporting the children and families affected by autism, we are canceling Monday’s Give Back Event based on the feedback we heard from our guests.

Good on them for responding to the feedback. It would’ve been even better if they explained why they made their decision — right now, it just looks like a strange reversal of course for anyone unaware of the controversy — but at least they won’t be giving money to an organization that spreads myths about autism.

Now let’s see if Chili’s can find a worthwhile autism charity to donate to, one that embraces science instead of celebrity-backed, unscientific rumors.

April 6, 2014 The Best Sound Bites and Speeches from Prominent Atheists, All on Video
Browse Our Archives
What Are Your Thoughts?leave a comment