A Secular Invocation at the Pensacola City Council Meeting

Earlier this year, David Suhor gave an excellent non-religious invocation at a meeting of the Pensacola City Council: 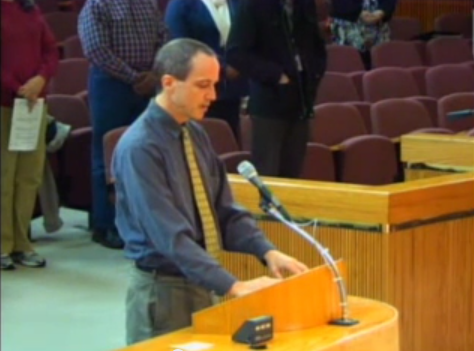 He ended it this way:

… May this invocation begin a new tradition where the non-believers among us feel as valued, loved, and honored here as any believer ever has.

But two weeks later, at the next meeting, his advice went unheeded as another minister was invited to deliver the prayers. Not surprising.

It won’t be long before the Supreme Court of the United States decides the fate of government invocation prayers. But keep in mind that if city councils across the country allowed more people like David to speak at meetings — or eliminated the invocations altogether — then there wouldn’t have been a lawsuit in the first place.

April 6, 2014
The Best Sound Bites and Speeches from Prominent Atheists, All on Video
Next Post

April 7, 2014 This Week, PBS Will Begin Airing Neil Shubin's Evolution Series, Documenting How We Are 'Just a Jerry-Rigged Fish'
Browse Our Archives
What Are Your Thoughts?leave a comment