What Single Factor Is Most Responsible for People Leaving Religion? April 5, 2014 Hemant Mehta

What Single Factor Is Most Responsible for People Leaving Religion?

There are a few factors that have a strong association with religious affiliation, like whether your parents were religious and how much formal education you have, but Professor Allen B. Downey of the Olin College of Engineering in Massachusetts says there’s another factor that has more influence than either of those options: The Internet. 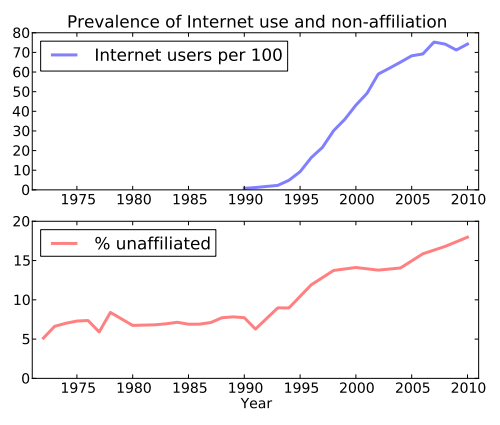 … it is easy to imagine at least two ways Internet use could contribute to disaffiliation. For people living in homogenous communities, the Internet provides opportunities to find information about people of other religions (and none), and to interact with them personally. Also, for people with religious doubt, the Internet provides access to people in similar circumstances all over the world. Conversely, it is harder (but not impossible) to imagine plausible reasons why disaffiliation might cause increased Internet use.

Downey’s data comes from the General Social Survey, a University of Chicago survey that has collected information since 1972. What he found was a strong correlation between Internet usage and religious non-affiliation. Obviously, that doesn’t mean Internet usage caused the rise in Nones, but no other factors seems to weigh in as heavily. (And it makes a lot of anecdotal sense, too — just ask any atheist under 35 if the Internet played a role in their loss of faith.)

Although a third unidentified factor could cause both disaffiliation and Internet use, we have controlled for most of the obvious candidates, including income, education, socioeconomic status, and rural/urban environments. Also, in order to explain changes over time, this third factor would have to be new and rising in prevalence, like the Internet, during the 1990s and 2000s… It is hard to imagine what that factor might be.

I’ve said it before, too. The ability to get your questions answered and your doubts affirmed by others who think the same way has done more to draw people away from religion than anything else. It also helps that you can debunk your pastors’ stories with a simple Google search.

(via MIT Technology Review — Thanks to Eric for the link)

April 5, 2014
Atheists May Soon Be Able to Officiate Wedding Ceremonies in Minnesota
Next Post