Creationist Ken Ham, a man many Christians accuse of misinterpreting the Bible, recently panned the movie Noah for being too “unbiblical.”

Now, capitalizing on the movie’s popularity, Ham is launching a new ad campaign — including digital ads near both Times Square and Hollywood — that suggests people can find out about the “real” Noah by visiting the Creation Museum: 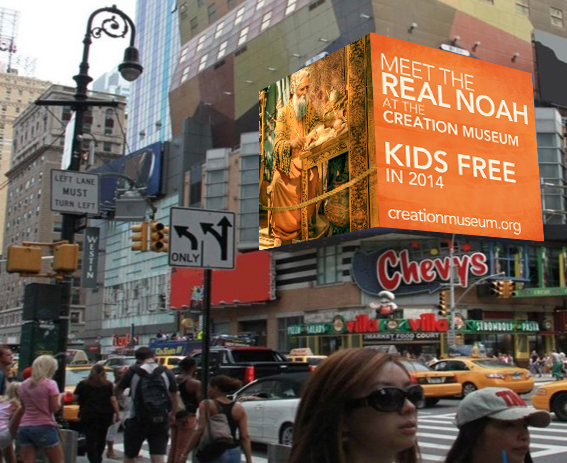 Yes — you will not only learn the true account of Noah and the Flood at the Creation Museum (instead of the fictional Hollywood account that features Noah as a homicidal maniac), but you can also be challenged concerning God’s Word and its saving gospel message.

… And please pray for the advertising campaign going on this weekend, including billboards near Hollywood and in New York City. We believed it important to do our best to encourage people to learn the truth about Noah and the account in the Bible.

There’s something kind of hilarious about Ham using the words “real” and “Creation Museum” in the same sentence… especially considering that the biblical measurements of the ark would never sustain the number of animals needed to bring on “two of every kind” unless you ignore all of science (which Creationists do freely) and that the biblical Noah lived to the tender age of 950.

But if you ignore pesky things like “reality,” then yes, the Creation Museum has a scale model of an ark and an animatronic Noah.

So there you have it: Creationists are attacking a film for not being accurate enough while simultaneously taking far more liberties with the truth than the film ever does.

April 5, 2014
Proposed Quebec Charter of Values May Lead to the Public Sector Firings of Those Who Wear Turbans or Hijabs
Next Post

April 5, 2014 A Song About How There Isn't Any God... Now with YouTube Comments!
Browse Our Archives
What Are Your Thoughts?leave a comment