In response to the Fort Hood shooting this week, Texas Republican Congressman Pete Olson took to Twitter to express his thoughts about what to do: 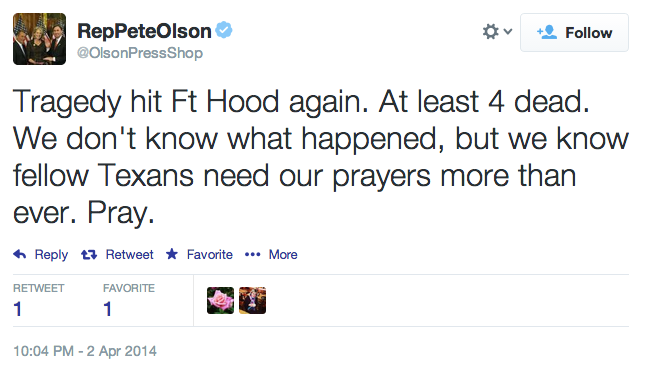 Well… whatever happened, prayer sure as hell won’t fix anything. And one of Olson’s followers replied back with that precise sentiment: 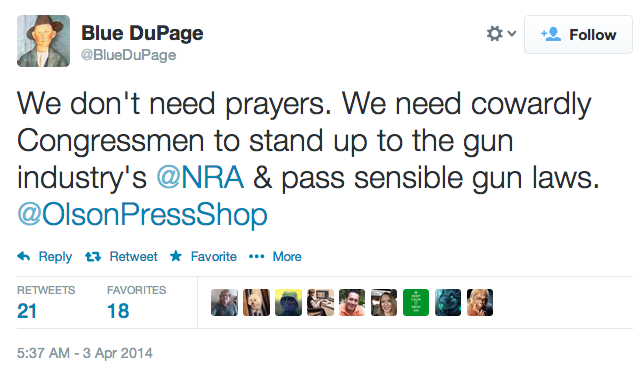 That would certainly be more effective.

You’d think the story ends there. But it didn’t. Olson was sooooo offended by the response tweet that when he went on a radio show the next day, he brought up the tweet multiple times and asked viewers to respond to @BlueDuPage and tell the tweeter to “get the heck out of America”:

Olson said he was experiencing a “deep anger” because this “cold, heartless liberal” did not support his call to prayer and instead sought to use the tragedy to promote a political agenda.

“Outrageous,” Olson said. “Outrageous. So I’m angry about that.”

Maybe there’s a debate to be had about whether standing up to the NRA would stop future tragedies like this one, but there’s just no argument when it comes to whether prayer will help. It won’t. (Don’t forget: the killer and his family were active members of their church.)

More importantly, though, what politician gets over-the-top outraged by what someone says on Twitter? Has Olson used Twitter before? He should be thrilled that his detractor stuck to the topic. His anger is aimed in the wrong direction. Maybe if he worried less about what people said on Twitter and channeled that rage into writing legislation that would give soldiers easier access to mental health professionals or, yes, strengthen gun control (though the killer in the Fort Hood case appeared to obtain his gun legally), he could actually do the very thing he thinks prayer will fix.

I’ve asked @BlueDuPage for a response to all this. I’ll update the post if/when I hear back.

April 5, 2014
What Single Factor Is Most Responsible for People Leaving Religion?
Next Post

April 5, 2014 Proposed Quebec Charter of Values May Lead to the Public Sector Firings of Those Who Wear Turbans or Hijabs
Browse Our Archives
What Are Your Thoughts?leave a comment