A day after another tragedy at the Fort Hood Army post in Texas, it’s not surprising that people would be searching for answers or trying to figure out if anything could’ve prevented the shooting.

Thankfully, we have the American Family Association’s Christian mouthpiece Bryan Fischer to answer that latter question for us: 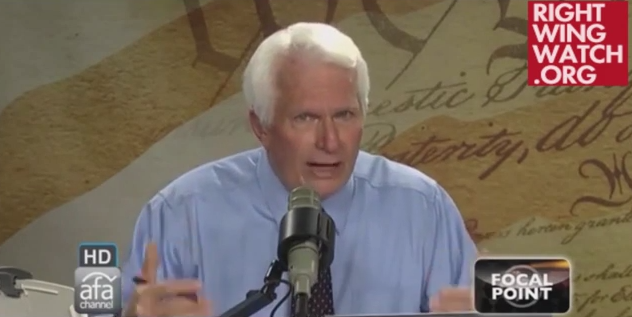 I mean, who knows, I’m not saying it would’ve stopped him, I’m not saying that at all, but I’m saying, somehow or other, that message didn’t penetrate to this guy. And part of it could be that he’s just never heard it. He hasn’t been told it. Nobody’s told him how important that command is.

It’s amazing how Fischer genuinely believes the only way someone would know that killing is a bad idea is through exposure to the Ten Commandments. There’s no way, in his mind, that people can be moral without the influence of God and Christianity.

In fact, one of the few things we know about shooter Ivan Lopez was that he and his family were very active in their church:

At Immaculate Conception church in Guayanilla, Lucy Caraballo said the Lopez family was active in church affairs and in the choir.

“Ivan was a good person, with a lot of values,” she said. “What happened? We don’t know what went through his head or what he went through recently in the Army. But he came from a good family. This is a very painful thing for us.”

Simply put, we don’t know why he did this. Not yet. But we can almost certainly rule out that he was never exposed to the Ten Commandments. Or the Bible. Or God.

That stuff alone isn’t enough to prevent you from committing a horrific act.