Sen. Ted Cruz Repeats Lie About How He ‘Won’ the Case to Keep ‘Under God’ in the Pledge of Allegiance April 3, 2014 Hemant Mehta

Sen. Ted Cruz Repeats Lie About How He ‘Won’ the Case to Keep ‘Under God’ in the Pledge of Allegiance

It was only a couple of weeks ago when Senator Ted Cruz told the audience at a Network of Iowa Christian Home Educators conference that he played a significant role in keeping “Under God” in the Pledge of Allegiance.

That was a lie. After Justice Antonin Scalia recused himself from the case, 5 of the 8 remaining justices dismissed the case altogether saying that Newdow didn’t have proper standing to bring the case to court. There was no official ruling on the case’s merits. Cruz didn’t “win” anything. 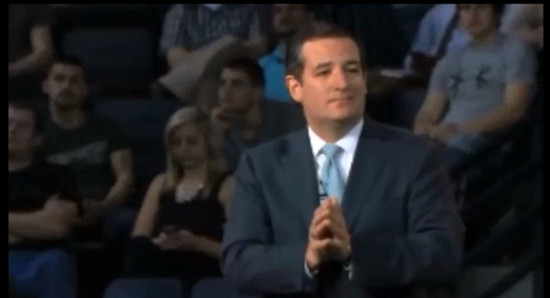 Yet, he’s still repeating the lie, most recently, during a speech yesterday at Jerry Falwell‘s Liberty University:

The words, ‘one nation under God,’ you’ll remember in California, when another atheist filed a lawsuit seeking to strike down the Pledge of Allegiance, and the federal court ordered the Pledge of Allegiance struck down. We went to the U.S. Supreme Court on behalf of all 50 states, defending the words “one nation under God,” and we won. Unanimously.

It wasn’t unanimous. And it wasn’t a “victory.” And the Liberty students appeared to just accept everything he said without question. Surprise, surprise.

April 3, 2014
Should Atheist Candidates Be Forthcoming About Their Religious Views?
Next Post