GOP Rep. Louie Gohmert: Separation of Church and State Always Meant ‘Church Would… Play a Role in the State’

A walking punchline already, Congressman Louie Gohmert (R-TX) did himself no favors by working on a World Net Daily-sponsored promotion for an upcoming Christian TV event. During his lengthy monologue, Gohmert stretched the definition of church-state separation so far back that he broke it beyond repair (at the 2:35 mark): 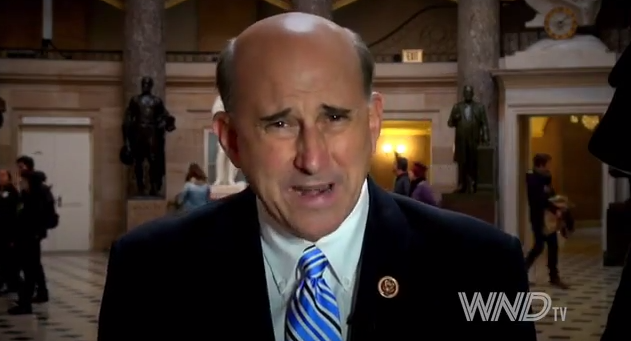 … President Thomas Jefferson — we’re talking about the guy who coined the phrase “separation of church and state” — who said there should be a wall of separation between church and state. But it was to be a one-way wall, where the state would not dictate to the church, but the church would certainly play a role in the state.

There you have it. Church state separation means that the state doesn’t get any sway over the church, but the church certainly gets a say in the state.

And he thinks that would fix our nation’s problems? As if things weren’t bad enough already… this is called twisting history to suit your needs. He must have picked it up from David Barton.

April 3, 2014
Sen. Ted Cruz Repeats Lie About How He ‘Won’ the Case to Keep ‘Under God’ in the Pledge of Allegiance
Next Post

April 3, 2014 Fight Church: A Movie About How Beating the Crap Out of Each Other Will Lead You to Christ
Browse Our Archives
What Are Your Thoughts?leave a comment