A.C. Grayling: Telling Schoolchildren That the Creation Museum Teaches Facts May Be a ‘Human Rights Crime’

During a recent speech at the National Federation of Atheist, Humanist and Secularist Student Societies 2014 Convention, philosopher A.C. Grayling went on a tangent from his talk about Humanism to discuss the Creation Museum (19:10 mark): 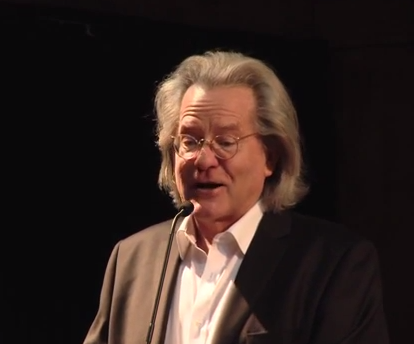 … I visited the Creation Museum. I kid you not. My ghast was flabbered, the minute I set my foot across the threshold of that place. They have these sort of electronic vegetarian Tyrannosaurus rex playing with the children of Adam and Eve in the Garden of Eden.

Maybe not quite that, but it’s certainly damaging to their educational careers, to be taught that fiction is fact and to be told scientists still debate this issue. It’s not fair to the kids — who may not encounter a voice of reason anytime soon.

April 3, 2014
Should Crimes That Take Place in Houses of Worship be Subject to Harsher Penalties?
Next Post