As we’ve seen, the owners of Hobby Lobby, a national chain of craft stores, don’t like the part of the Affordable Care Act that would oblige them to cover emergency contraception in their employees’ healthcare plans. It’s against their religious beliefs, you see. So Hobby Lobby took its fight all the way to the Supreme Court, where a ruling is expected in June. 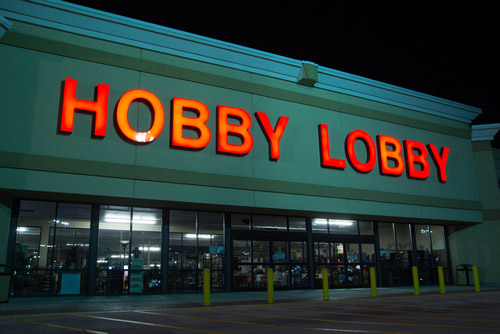 Meanwhile, we can all marvel at these facts, unearthed by Molly Redden at Mother Jones:

While it was suing the government, Hobby Lobby spent millions of dollars on an employee retirement plan that invested in the manufacturers of the same contraceptive products the firm’s owners cite in their lawsuit.

It’s all quite rich, especially because Hobby Lobby loves to remind everyone how seriously it takes its evangelical-Christian principles:

In their Supreme Court complaint, Hobby Lobby’s owners chronicle the many ways in which they avoid entanglements with objectionable companies. Hobby Lobby stores do not sell shot glasses, for example, and the [owners] decline requests from beer distributors to back-haul beer on Hobby Lobby trucks.

Redden asked Hobby Lobby and the Becket Fund for Religious Liberty, the conservative group that provided the craft chain with legal firepower, about the not-so-principled investments. So far, crickets.