The Debate Over Gay Marriage is Precisely What Christians Will Be Known For April 1, 2014 Hemant Mehta

Blogger Kristen Howerton, writing for On Faith, asks Christians what she perceives to be a vital question:

Christians will likely continue to be divided over the issue of same-sex marriage and relationships. But unfortunately, these debates seem to be taking center stage as we interact with the world. Is this what we want to be known for? My hope is that we can begin to make peace with each other over this issue and move forward despite our differences, and put the focus back where it’s supposed to be: sharing God’s love.

“Is this what we want to be known for?”

That’s a great question… 10 years ago.

Now, it makes about as much sense as asking people if they still prefer their CD players over their iPods. The majority of us answered and moved past the gay marriage question a long time ago. The better question is: “What’s taking Protestants so damn long to do the same?” 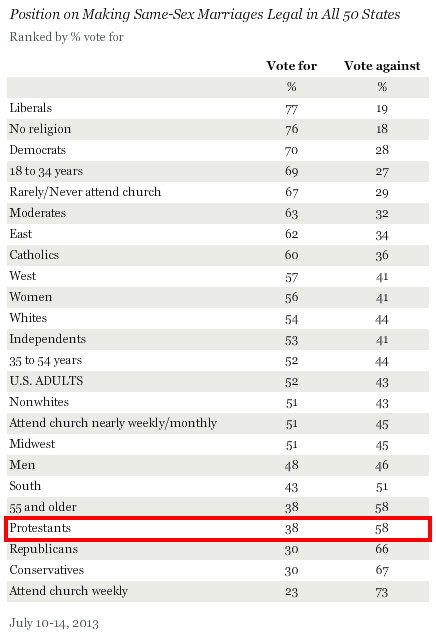 Obviously, the biggest problem is with the Bible and how the majority of Protestants seem to interpret it to mean that homosexuality is inherently wrong (at least if you act on it, even within the context of a marriage).

You would think a solution lies within Christians like Howerton who politely try to push back… but it’s hardly a fix when even she can’t seem to bring herself to proclaim in the piece that there’s nothing sinful or wrong with homosexuality or that Christian pastors should be supporting and embracing and blessing same-sex marriages.

And why not? Two reasons. One, because even many “progressive” Christians believe the same things their pastors do about homosexuality — and they think the solution is simply welcoming gay people into the church without unequivocally accepting same-sex unions. Second, those Christians who actually do support equal rights are often too afraid of admitting it, fearing the repercussions. They can’t admit that their pastors and churchgoing friends are bigots because they think the word, while accurate, is too harsh.

Until decent Christians are willing to leave their anti-gay churches for places where gay people are fully accepted and welcomed, no change will take place. Until decent Christians make it clear on their Facebook pages and Twitter handles and everywhere else that they fully support gay marriage — full stop — and refuse to be part of a congregation that feels otherwise, no change will take place.

It’s bad enough to see pastors vilify gays and lesbians on a weekly basis. It’s hardly better when empathetic Christians are unable to call them out on it publicly. It’s not even enough for someone like Pope Francis to ask “Who am I to judge?” because, at the end of the day, he still support Catholic doctrine that is wildly homophobic. (Even if the Pope won’t judge you, he believes God will.)

People like Howerton are too polite, trying to find some magical mythical middle ground on the issue. There isn’t one. There’s the inclusive, tolerant, accepting side… and there’s the side most evangelicals are on.

I’m not saying you have to stop being a Christian. But you do have to recognize that Christianity as a whole is part of the problem here, not the solution, and it’s up to individual Christians to take action if they want to save the church. Howerton asks “How can we find unity in this division?” and it’s the wrong question. Forget unity. Those anti-gay Christians aren’t going to budge. What you need to do is leave them behind and find community among people who don’t use their faith as a shield against common sense and decency.

The trend lines are not going to change. Young people aren’t going to become more prejudiced as they age. And in a decade or two, we won’t forget that Christianity was the reason it took so long for LGBT individuals to obtain full civil rights.

As the World Vision U.S. debacle showed us, the Christian bullies still have the power. But we knew that well before World Vision’s board decided it was more important to cater to the theological whims of assholes than welcome gay employees regardless of the pushback. The only surprise about the fact that one-third of Millennials have left their faith over anti-gay policies is that the number isn’t higher.

That’s why part of me doesn’t mind when a group of Christians plants a flag in the sand to support Chick-fil-A or Duck Dynasty or socially conservative politicians. They’re just hurting themselves in the long run — and giving us the chance to document yet another example of why no one should willingly join their club.

But that’s selfish. The actions of too many Christians hurt too many LGBT people. For my gay and lesbian friends’ sake, if they’re Christian, I want them to be able to find a church where they’re accepted instead of merely tolerated.

Too bad not enough Christians are willing to take a stand on their behalf — by openly rejecting the theology of their pastors and fellow believers.