Secular Coalition for America Fails Nearly 60% of Congress (Including Many, Many Republicans) in 2013 Scorecard April 1, 2014 Hemant Mehta

Secular Coalition for America Fails Nearly 60% of Congress (Including Many, Many Republicans) in 2013 Scorecard

The Secular Coalition for America has released its 2013 Congressional Report Cards and things aren’t looking all that great. (Though it’s slightly better in the Senate than in the House.) 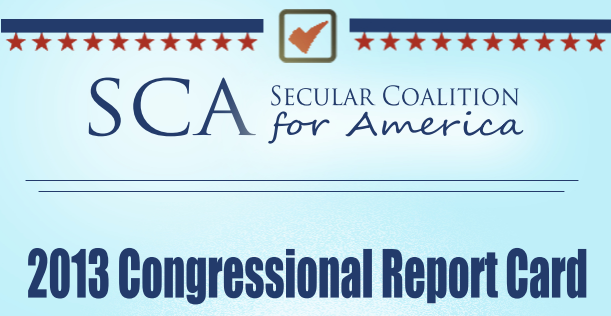 First, the U.S. House of Representatives:

(Not all Reps were counted for different reasons.)

The grades were based on the representatives’ votes on 14 different issues, including support for school board prayer and the Marriage and Religious Freedom Act (SCA was against both).

Those grades were based on how Senators voted on issues including FEMA funding for çhurches and expanding the religious exemption of the Employment Non-Discrimination Act (SCA was against both).

“In a country where at least one in four Americans doesn’t identify with any religion, these grades underscore the work so many lawmakers still must do in separating their personal religious beliefs from our legislation as a pluralistic nation,” said Edwina Rogers, Executive Director of the Secular Coalition for America. “The only way to protect everyone’s right to religious freedom is to keep all religion out of our secular government.”

With a total of 315 failures, Congress has a long way to go before no member is left behind.

April 1, 2014
Beware Beach Baptisms: the Lord Giveth and He Taketh Away
Next Post

April 2, 2014 8 Reasons Purity Balls Are Just Plain Creepy and Wrong
Browse Our Archives
What Are Your Thoughts?leave a comment