About a month ago, we learned that at least one religious school in England gave students a required standardized science exam… with some of the questions redacted: 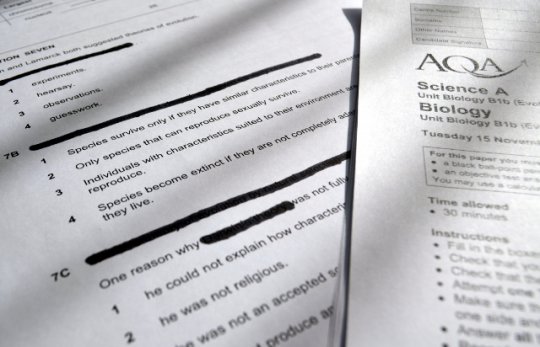 Those students were, therefore, unable to answer those questions. Turns out the reason for the blackouts was that the questions delved into the topic of evolution, something that one school advisor said flew in the face of their “ethos and culture.”

In the U.S., private religious schools don’t have to give these exams, but the schools we’re talking about here are “voluntary aided” schools, meaning they are funded mostly by the state and required to follow certain state protocols, despite being religious in nature.

The National Secular Society rightly felt that faith wasn’t a good excuse to shortchange these students’ education. They filed a freedom of information request and discovered that, not only were school officials blocking questions about evolution, but also that government officials were complicit in the process!

The freedom of information response reveals that that faith schools will still be permitted to redact questions they don’t approve of as long as this is done in collaboration with the exam board.

[Exam board] OCR acknowledges in its correspondence that the issue has “significantly wider implications and could apply to other faith schools.” In correspondence contained within the FOI response it is clear that neither OCR nor [exam regulator] Ofqual regarded the malpractice at Yesodey Hatorah an isolated incident.

The problem wasn’t just the censoring. It was also about how the children at these schools were getting a second-rate education, not learning what they needed to know to prepare them for life outside of the classroom. At the very least, even if they didn’t want to accept evolution, it’s the school’s responsibility to make sure they understand it.

Yesterday, we finally got some good news: The OCR examination board will no longer allow questions to be redacted no matter the religious-based excuses:

OCR is today setting out its long-term approach to schools that redact exam questions.

Last summer we discovered that two schools had redacted — covered up — questions before the students sat the exams. We immediately launched malpractice investigations and brought the issue to the attention of the Regulator, Ofqual.

We also alerted Ofsted and the Department for Education as we felt that it raised more general concerns that extended beyond matters of assessment, to the delivery of the National Curriculum and student entitlement. We also raised the issue with our fellow Awarding Bodies.

We have now been able to consider our position and have concluded that as a matter of policy schools should not be permitted to tamper with question papers prior to a student sitting an exam. (In cases where changes are required to facilitate disabled candidate access, adjustments are made by the Awarding Body).

OCR believes that this approach should be adopted by all Awarding Bodies and supported by the Regulator. We told Ofqual that this is the approach we would be taking and wanted clarity from its Board as to whether it would be supporting this policy. We are pleased that the Regulator has said that it agrees with us that such a practice should not be permitted.

The OCR doesn’t thank the National Secular Society or the British Humanist Association by name, but they’re the reason this change is taking place:

Stephen Evans, campaigns manager at the National Secular Society, said: “This is a significant victory for the rights of children and young people to not have their education impeded by religious organisations seeking to pursue their own agenda of inculcation or indoctrination.

“We now call on the Government to introduce robust measures to ensure all faith schools teach the National Curriculum in full, including areas that clash with schools’ religious ethos, such as evolution and human reproduction.”

I would urge the government to keep a special eye on those faith-based schools next year to make sure they’re following those rules.

(via the Rationalist Association)

April 1, 2014
Murderer, 84, Says No to Earthly Justice; Would Like to Settle Deadly Dispute Over Cable TV in the Afterlife
Next Post