This Must Be the ‘Jenny McCarthy Effect’ in Action March 31, 2014 Hemant Mehta

This Must Be the ‘Jenny McCarthy Effect’ in Action

When it comes to autism, what does the science tell us? And how does the media cover it?

Neuroscientist Sam Wang, in an essay for the New York Times, goes into both issues:

A study published last week found that the brains of autistic children show abnormalities that are likely to have arisen before birth, which is consistent with a large body of previous evidence…

Over the last few years, we’ve seen an explosion of studies linking autism to a wide variety of genetic and environmental factors. Putting these studies in perspective is an enormous challenge. In a database search of more than 34,000 scientific publications mentioning autism since its first description in 1943, over half have come since 2008.

That’s all well and good, but the graphic included in the piece is a doozy. It shows that when it comes to the science, we ought to be paying closer attention to genetic and environmental factors (the risk of autism is much higher if you have an autistic twin or had an injury to your cerebellum before birth)… and we should stop pretending that vaccines have any connection to it, as shown by the final item on the list: 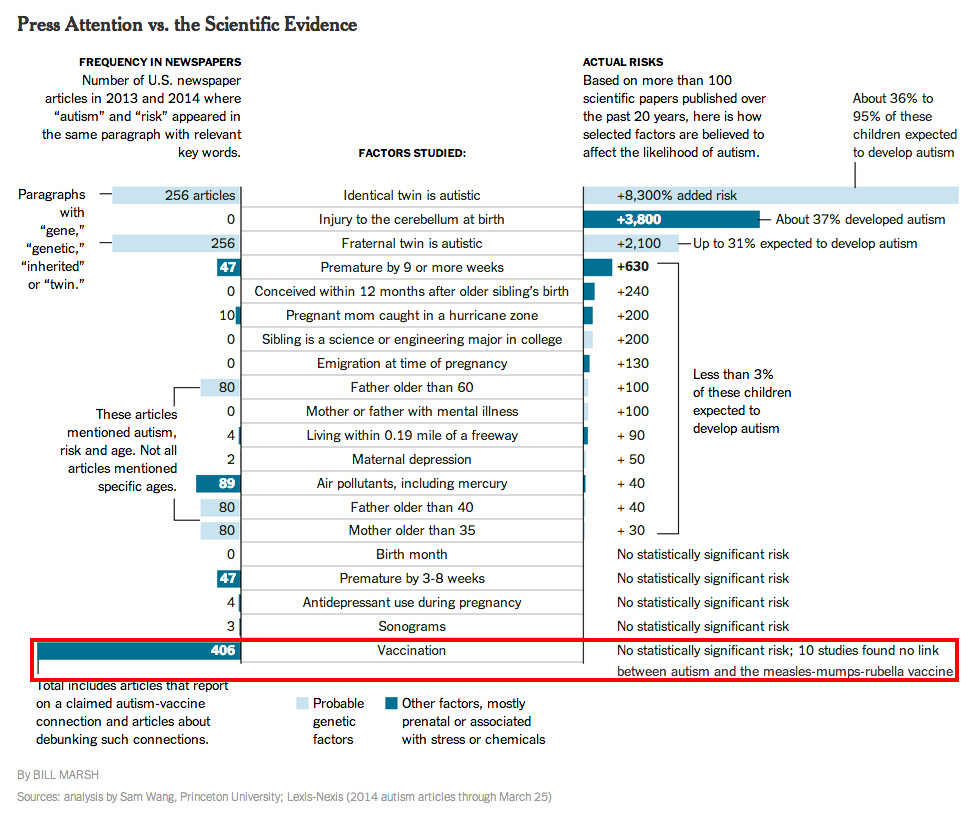 Granted, the media coverage of vaccines (much as with this site) often includes the fact that there’s no link between vaccines and autism, but certainly some of it feeds directly into the hype believed by gullible parents and people who don’t understand how science works. And more is written about that (unproven) connection than any of the other possible causes of autism.

March 31, 2014
Church Full of Oil Salesmen Claims to Cure Everything from Heart Defects to Mental Illness
Next Post