Creationist to Give Commencement Address at Montana Engineering School. Let the Boycotts Begin

Greg Gianforte (below) is a wealthy Christian whose family foundation has donated a lot of money to “Christian causes in education, poverty and evangelism” including the Glendive Dinosaur and Fossil Museum — a Creation museum in Montana. 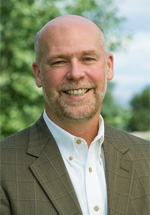 By itself, that’s not a big deal. He can waste his money however he’d like. But it gets worse. He and his wife have worked closely with both the conservative Heritage Foundation and an affiliate of Focus on the Family. His wife even testified against an ordinance that would ban discrimination against LGBT people.

But back to the Creation museum thing for a second. We’re talking about someone who believes the world is a few thousand years old, an idea that makes no sense to anyone trained in science.

So who was the genius who invited the Gianfortes to be the commencement speakers at an engineering school that graduates many of the top geologists in the world?

That would be Don Blakketter, chancellor of Montana Tech. The Gianfortes haven’t given any money to the school directly, but they’ve paid for scholarships for several students pursuing degrees in computer science.

To say the least, Gianforte is an odd choice to address an audience of young men and women who are embarking on careers in the earth sciences, many as mining and petroleum engineers. On the day Gianforte speaks, these graduates will be ending four years of studying how the Earth, and everything in it, formed over billions of years out of stardust.

To their credit, many of the students and faculty members are voicing their opposition to the choice, even threatening to walk out if the anti-evolution (and anti-gay) speakers are given the privilege of addressing them:

Professors have asked Blakketter to revoke the invite on the grounds that Gianforte is anti-science whereas Montana Tech is pro-science, and students are discussing staging a walkout during the speech.

There are also plans to possibly stage an alternative graduation ceremony with a more credible speaker.

I’m with those students and faculty members. Despite the Gianfortes’ success in business and their support of science where it suits their needs, their Creationist beliefs and anti-gay bigotry go against the very principles the school claims to hold dear.

The decision makes as much sense as inviting Jenny McCarthy to give the commencement address at your medical school.

So how has the chancellor responded to the criticism?

… Blakketter, after being approached by the faculty, contacted Gianforte and instructed him not to bring up creationism during his presentation.

I agree with Eric Stern at Salon: Gianforte absolutely should bring up Creationism. Let him tell these graduates why everything they’ve learned over the past several years was a lie. Let him explain why the Bang Bang Theory is a sham and why evolution is a myth. Let’s see how that goes over. Let Gianforte embarrass himself in front of educated students who know far more about core aspects of science than he does.

That would be far more memorable than anything else he could possibly say.

(Thanks to Tom and McSkeptic for the link)