A New Billboard Near the Air Force Academy Reminds Cadets It’s Still Okay to Be Christian… As If Anyone Doubted It March 28, 2014 Hemant Mehta

There was a time when students who finished Basic Cadet Training at the U.S. Air Force Academy would recite this Honor Oath:

“We will not lie, steal or cheat, nor tolerate among us anyone who does. Furthermore, I resolve to do my duty and to live honorably, so help me God.”

That clause finally became optional last October thanks to Mikey Weinstein and the Military Religious Freedom Foundation. The Air Force Academy even issued a statement explaining why it was a common sense change: 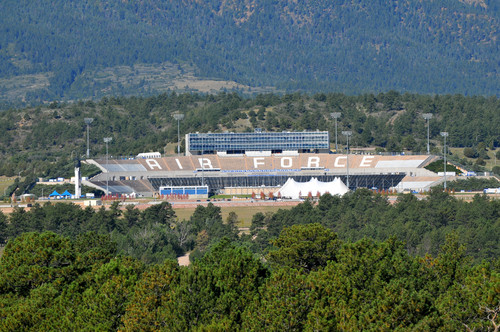 The AFA statement read, in part, “Here at the Academy, we [want] to build a culture of dignity and respect, and that respect includes the ability of our cadets, Airmen and civilian Airmen to freely practice and exercise their religious preference –- or not.”

It made perfect sense. The rest of the oath — the substantive part of it — remained intact. The religious portion was there for the students who wanted it, and the students who didn’t want it didn’t have to say it. To be clear: No one was prohibiting religious cadets from saying the phrase if they wanted to. Everyone knows that. That isn’t news.

Still, a group called the Chaplain Alliance for Religious Freedom, along with members of the Restore Military Religious Freedom coalition, has put up a billboard that makes no sense whatsoever: 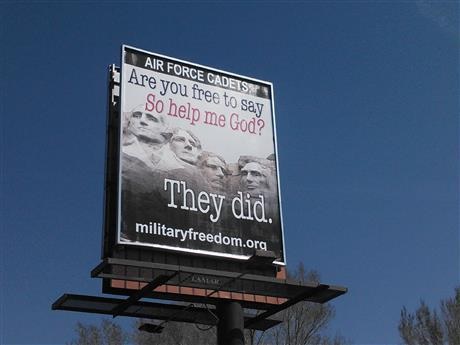 The sign features an image of Mount Rushmore with the captions reading: “Air Force cadets, are you free to say So help me God?… They did.”

“The message is clear, our Founding Fathers said ‘So help me God’ on taking their oath of office; Air Force cadets have that same freedom,” said Chaplain (COL) Ron Crews, USAR Retired, executive director of the Chaplain Alliance for Religious Liberty. “Our billboard is a reminder that cadets can say the phrase, which is deeply rooted in American tradition.”

You got that, everyone? IT’S OKAY TO BE A CHRISTIAN AT THE AIR FORCE ACADEMY! (*Phew* Glad we finally settled that one. I was worried for a second.)

The billboard also carries a couple of implied messages that are complete fiction. First, that there are forces out there trying to stop cadets from saying “So help me God.” No one’s trying to do that. No one’s trying to take away Christians’ religious freedom. The only reason this issue even became a controversy was because Christians were forcing their beliefs onto everyone else.

The other implied message is that it’s downright patriotic and American to say “So help me God” — even our most famous presidents said it! Which tells you nothing more than there’s a long-standing tradition that presidents haven’t bothered to challenge.

In a statement released Wednesday, retired Chaplain Ron Crews, executive director of the Chaplain Alliance, argued that the oath is “deeply rooted in American tradition.”

“‘So help me God’ is a solemn reminder that cadets are pledging their fidelity, both to their country and to someone higher than themselves,” said Crews.

“The presidents that Americans admire all solemnly uttered these words when they took their oaths of office. Our Air Force cadets should be encouraged to follow their example.”

The cadets are pledging their fidelity to their country, yes, but they sure as hell don’t need to pledge anything to a higher power unless they want to. It’s ridiculous that the Chaplains Alliance is freaking out over the fact that some cadets may not feel the same way they do.

***Update***: The Military Religious Freedom Foundation has announced that they’ve purchased the space on the other side of this billboard to put up their own sign in response: 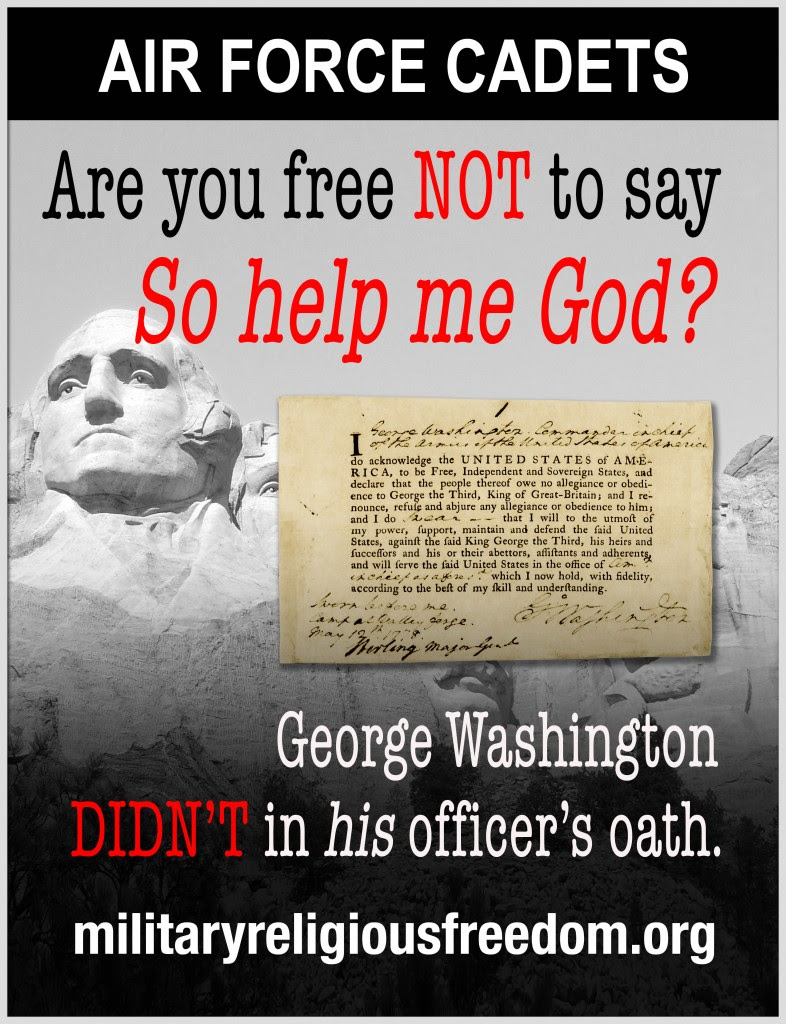 MRFF has scheduled the opposing billboard to be publicly posted within days directly on the opposite side of the RMRF billboard. The billboard depicts a similar photo of Mount Rushmore and is accompanied by the text, “Are you free NOT to say So help me God? George Washington DIDN’T in his officer’s oath.” The billboard also contains a photograph of an oath signed in 1778 at Valley Forge by President (then-General) George Washington, which makes absolutely no religious reference to ‘God’ whatsoever.

(Top image via Shutterstock. Thanks to Brian for the link)