Why Haven’t Evangelical Christian Leaders Learned Their Lesson Yet?

Here’s Focus on the Family President Jim Daly in 2011, responding to an interview question about whether evangelicals were winning over the younger generation when it came to same-sex marriage: 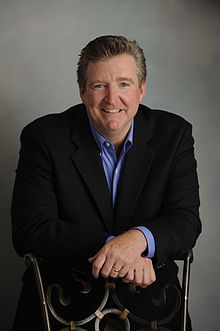 We’re losing on that one, especially among the 20- and 30-somethings: 65 to 70 percent of them favor same-sex marriage. I don’t know if that’s going to change with a little more age — demographers would say probably not. We’ve probably lost that. I don’t want to be extremist here, but I think we need to start calculating where we are in the culture.

Here’s Daly, days later, doubling down on those same points:

What I was trying to say in that interview, when the question was asked about the younger generation, is you can’t deny the stats. So when you’re looking at that and they’re saying 65 to 70 percent of those under 40 or 35 — I can’t remember exactly — support same-sex marriage, if that does not change within that community as they become 50 and 60, yeah it’s over.

And here’s Daly yesterday, responding to World Vision U.S.’s statement that it “made a mistake” and would be reversing its decision to hire gay, married Christians:

… I was so perplexed and concerned after learning of their policy change allowing their employees to live in homosexual marriage. Their original decision, announced on Monday, raised significant biblical contradictions, that however you cut it, were simply irreconcilable when it comes to fidelity to the Holy Scriptures.

But now that the Board of this important organization has asked for forgiveness, it’s time for us to do the right thing, too.

They made a mistake.

It’s not like anyone’s looking at Focus on the Family’s leadership to do the right thing (why start now?), but when Daly took over the organization a few years ago, there was hope, at least from afar, that he wouldn’t be the crazy culture warrior that the previous president James Dobson was. We were wrong about that.

He’s arguing now — as many, many evangelical Christians are — that World Vision U.S. was wrong to hire gay Christians who were already married. Since Focus loves Christians and loves marriage, you’d think this was a ridiculously easy idea to get behind. Supporting gay Christian couples who are in a committed relationship? This should be a no-brainer for Christian groups.

Well… at least the “no-brainer” part is right.

This is why evangelicals are losing the culture wars. They love to talk about kindness and commitment and being decent human beings… but the moment they get a chance to extend that love to LGBT individuals, they raise their bibles up as shields and retreat.

It’s appalling how so many World Vision supporters threatened to (or did) withdraw their support from the organization — putting starving kids in even further jeopardy — just because some gay people wanted to help those kids, too. For those Christians, it wasn’t enough to help those less fortunate; they wanted to make sure gays and lesbians couldn’t be part of the club.

I think this image from Hacking Christianity said it best: 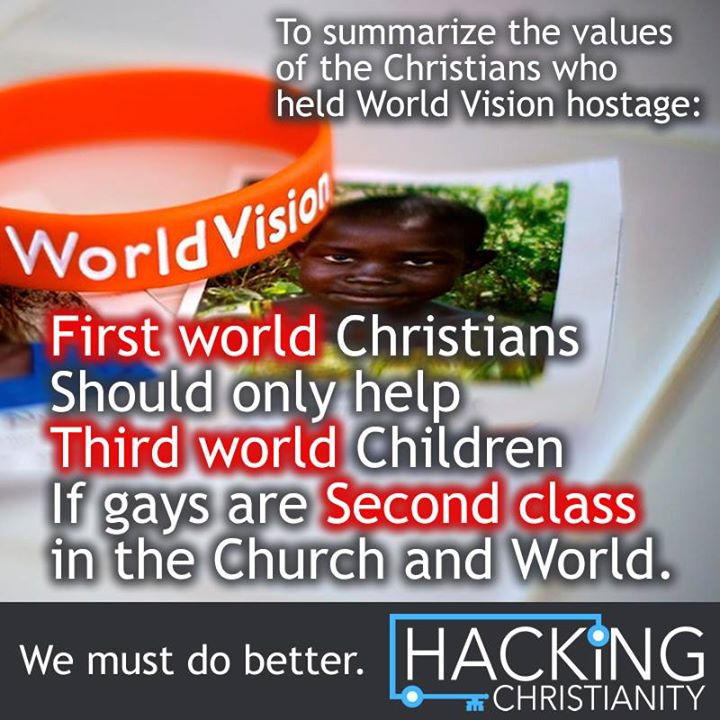 Obviously, not all Christians feel this way and there’s no shortage of them pushing back against World Vision’s cowardice. But the usual batch of conservative leaders are showing us precisely why they’re losing the younger generations.

No one wants to be part of a bigoted organization, even if they’re doing great work. World Vision U.S.’s “new” policy is no different from the one it had last week, but the group’s board has now chosen to openly associate with anti-gay animus. If I were thinking about donating to hungry children, even as a Christian, I would look for other, better options before I ever considered going to them.

Meanwhile, it’s the starving children who are caught in the middle of the evangelicals’ hissy fit.

March 27, 2014
Atheists Will Soon Deliver Even More Anti-Biblical Books to Georgia State Parks, All Thanks to the Governor
Next Post