God’s Not Dead ‘Will Likely Be Part of a New Branded… Movie Series,’ Says Producer

First of all, Todd VanDerWerff, writing for the AV Club, has the best review of God’s Not Dead you’ll read all day, calling the film a bust even by Christian movie standards: 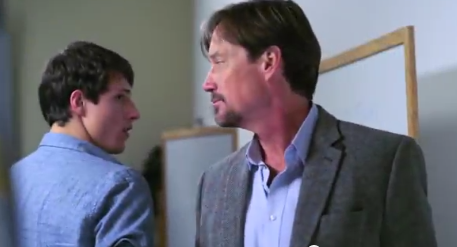 To say God’s Not Dead preaches to the choir would be an understatement. It’s the pastor, staring in a mirror, preaching to himself.

[Christian student] Josh, and the film that takes his viewpoint, doesn’t dare actually engage with [atheist professor Jeffrey] Radisson’s arguments; any legitimate critiques of Christianity are ignored in favor of suggesting that all atheists are just haters who need someone to ask them to point out on the doll where organized religion touched them.

Meanwhile, Pure Flix Entertainment CEO Russell Wolfe, the film’s producer, says the movie may now be the first in a series:

(Cue a bunch of bad jokes about “resurrecting” the franchise.)

The best part of The Blaze’s interview with Wolfe is his response to the criticism that the scenario depicted in the movie — where a professor demands that his students sign a statement that God doesn’t exist — would never happen in real life:

“That’s something we ended up hearing — that atheists were saying no professor would ever do that,” he said of Radisson’s extreme behavior in the film. “So, that’s why I decided to list the cases at the end of the film.”

… to prove that First Amendment infractions sometimes unfold at college campuses, Wolfe inserted a list of more than 40 real-life court battles at the end of the film — cases in which “university students, campus ministries and clubs [were] attacked for their biblical faith.”

While the cases cited at the end of “God’s Not Dead” were not identical to the scenario presented in the film, Wolfe said the movie was based loosely on real-life battles over religious freedom and free speech.

March 26, 2014
World Vision U.S.: We 'Made a Mistake' and Won't Be Hiring Gay Married Employees Anymore
Next Post