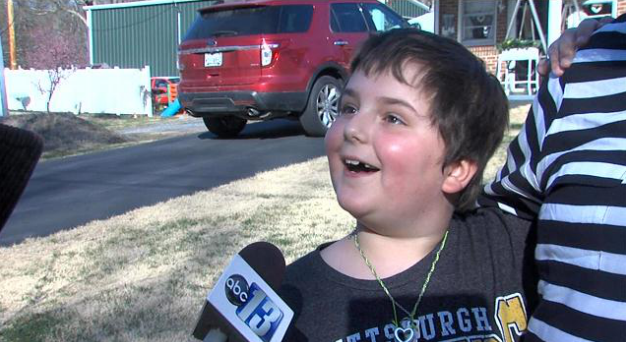 Timberlake Christian Schools in Virginia is essentially forcing her out because she doesn’t look feminine enough:

… we believe that unless Sunnie as well as her family clearly understand that God has made her female and her dress and behavior need to follow suit with her God-ordained identity, that TCS is not the best place for her future education.

… We love Sunnie and do want the best for her. We would miss her presence here, but we do not want her future years [to] be filled [with] confusion and conflicting input from those who are guiding her.

The problem here is clearly not with Sunnie — or her adoptive grandparents. It’s with the students and administrators who think you’re not properly female unless you fit their precise mold of that word.

“How do you label a child, eight years old, or discriminate against an eight year old child? It just don’t happen” said [grandfather] Carroll Thompson.

Speaking of long hair, I can’t wait till this school kicks Jesus out. How dare he never get a proper manly haircut?

Timberlake, by the way, is a stone’s throw from Jerry Falwell‘s Liberty University and offers a 75% tuition discount to “qualifying seniors.”

The school has responded to the negative press by issuing their own statement, claiming (of course) that they did nothing wrong:

You can be assured that we have cared for Sunnie and worked with her grandparents for several years to assist them. Our TCS teachers and administrators love Sunnie and we can assure everyone that this has never been an issue of hair length or boots as it has been portrayed. It has been our constant desire over the last several years to work with this family and to shepherd this precious little girl in a way consistent with traditional values.

As a private Christian school, we have the responsibility to all our students to assist parents to instill the Christian values upon which our school is founded.

We reiterate that the decision to remove Sunnie was entirely that of the grandparents.

You know, it’s not really a “decision” when the school tells you they don’t want your kid there…

And don’t you see? It’s totally not about her hair length or boots. It’s about Sunnie properly embracing her gender the way the Bible commands! (So I guess she won’t need that Liberty discount after all…?)

Ugh. To force a child away from her friends, to suggest that being herself isn’t good enough for God, it’s just fucked up all around. At least Sunnie’s out of that hellhole now. Let’s hope she’ll be enrolled in a better school this fall — one where the students and adults embrace her for who she is and not what she looks like or how she acts.

Side note: A commenter on a local news site claims that she was similarly pushed out of TCS in eighth grade for a different reason:

… teachers were gossiping about how large my chest area was for an eighth grader and that it was “inappropriate” because guys were looking at me. We had uniforms!

By their fruits, ye shall recognize them…

March 26, 2014 Third Grader's Attempt to Make the Wooly Mammoth South Carolina's State Fossil Foiled by Bible-Believing Senators
Browse Our Archives
What Are Your Thoughts?leave a comment