Why is This Vaccine-Denying Actress a Featured Speaker at the National Science Teachers Association’s Conference? March 25, 2014 Hemant Mehta

Why is This Vaccine-Denying Actress a Featured Speaker at the National Science Teachers Association’s Conference?

Last year, at a conference for the National Council of Teachers of Mathematics, The Big Bang Theory actress Mayim Bialik was a speaker. It made sense, I suppose: She’s on a show about nerds and she’s a “Brand Ambassador” for Texas Instruments. Hard to get more math-y than that. 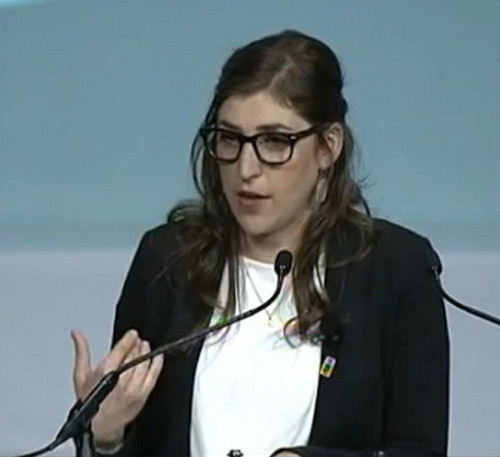 It turns out Bialik is also a featured speaker at the annual convention for the National Science Teachers Association taking place in just over a week. Again, makes sense on paper, given the show she’s on and how she has a Ph.D. in neuroscience.

Oh. By the way. She doesn’t vaccinate her children:

[People Magazine:] Reader N.S. remembers reading about your contemplating whether or not to vaccinate the kids. What decision did you reach?

[Bialik:] We are a non-vaccinating family, but I make no claims about people’s individual decisions. We based ours on research and discussions with our pediatrician, and we’ve been happy with that decision, but obviously there’s a lot of controversy about it.

No… actually, there’s no controversy about it, at least when it comes to people who actually know things about vaccines. It’s only controversial in the circles inhabited by people who think Jenny McCarthy and Kristin Cavallari are wise parents.

How does someone who actively goes against scientific wisdom get chosen to speak at a conference of science educators?

I don’t know, but I sent an email last night to conference organizers asking them why they didn’t do their research — or why Bialik was invited if they did indeed know about her position. I’ll post an update if I hear back from them.

Will Jenny McCarthy be invited to deliver a keynote next year? How about Ken Ham — he’s very into ‘science’ education, you know. Gosh, if we’re going to open the door to quacks, the pool of potential speakers just expanded immensely! Joseph Mercola? Andrew Weil? Deepak Chopra!

Hopefully, some of the teachers who attend the conference will get a chance to question Bialik on her anti-science stance. And get it on camera, of course.

March 25, 2014
Pat Robertson Tells Viewer That Her Atheist Co-Worker Was Probably Raped, Demon-Possessed, or Abused by Her Father
Next Post