Pat Robertson Tells Viewer That Her Atheist Co-Worker Was Probably Raped, Demon-Possessed, or Abused by Her Father March 25, 2014 Hemant Mehta

Pat Robertson Tells Viewer That Her Atheist Co-Worker Was Probably Raped, Demon-Possessed, or Abused by Her Father

I don’t know why Pat Robertson offers advice on the 700 Club when the things he suggests are so completely, awfully wrong… but until he stops, he’s just a goldmine of sound bites.

Yesterday, a viewer asked him if she should stop preaching to an atheist co-worker (correct answer: Yes) who got annoyed at every mention of God, Robertson explained that her colleague had serious problems if she didn’t like hearing about God all the time: 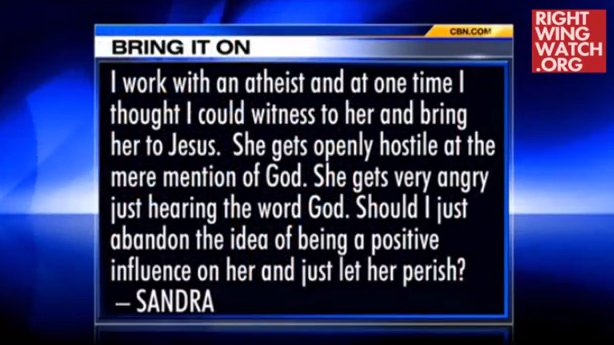 “I don’t know if you’re dealing with something that is demonic or something that is deeply ingrained, but, I mean, to be that openly hostile to the word ‘God’… it’s something beyond normal human experience. Something has happened and she associates God — maybe she had an abusive father, somebody who raped her and then acted like he was preaching to her from the Bible. You just never know what is going on in somebody’s childhood. All you can do is be understanding and be loving and don’t try to push anything on her. Pray for her, but if she won’t hear, she won’t hear…”

This isn’t a problem for Pat Robertson to solve. It’s a problem that needs to be raised with the HR staff.