After Radio Host Implies That Activist Should Be Beaten Up, Fox News’ Todd Starnes Does the Right Thing March 25, 2014 Hemant Mehta

After Radio Host Implies That Activist Should Be Beaten Up, Fox News’ Todd Starnes Does the Right Thing

Normally, when we talk about Fox News’ Todd Starnes (below), it’s because he’s making up a story of Christian persecution. 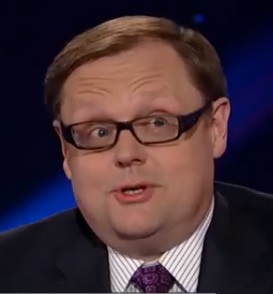 But Starnes actually did something decent yesterday. Appearing on Christian fanatic Rick Wiles‘ radio show to discuss a story about Bible verses appearing on Air Force Academy dorm room white boards (and the person who complained about it), Starnes and Wiles had this exchange:

Wiles: You know what [whistleblower] Mikey Weinstein needs? I’ll say this on my radio show; I can get away with it: he really needs to be met in a dark alley by a couple of special forces commandos and given an attitude adjustment. You don’t have to comment, Todd; I said it on my program. I’m fed up with that guy.

Starnes: I have to really incredibly object to that.

Starnes: Well, that may be the case but this is a free country and individuals are allowed to voice their opinions of whether or not they agree or disagree and they should be able to do so without any threat of violence or force…

Wiles: Okay, but he doesn’t just express his opinions…

Wiles: He’s pursuing Christians. He is on a war against Christianity.

Starnes: Well, and that is certainly his right. The issue here is not Mr. Weinstein and, again, you know, we should live in a country where people can express their views without any threat of violence. The issue here is the Air Force Academy and this idea that they kowtow to every single telephone call they receive from him.

Starnes: And I do apologize, but I do have to end this interview. Again, we just strongly object to that comment you made, sir.

Wiles: I didn’t mean to offend you, Todd. I’m just saying I think many Americans are just plain fed-up with this guy.

Starnes: Well, I’m sure they are and again, but we do have to end this interview. Thank you very much.

Wiles: Okay Todd, thank you. Good bye. Well, I tried to five years to get Todd Starnes on TruNews. I finally got him and he hung on me after five minutes.

It’s not often on this site that we credit conservatives for taking the high road, but Starnes did the right thing. And now we know what it takes for him to do that: He just has to be lumped together with an even more irresponsible conservative.