It’s been a while since I’ve posted something by Pastor Steven Anderson, but the preacher just gave one of those sermons that you don’t really believe anyone would deliver until you hear it. Not only does he say women should remain silent in church, he adds that they shouldn’t even say “Amen” if they agree with him: 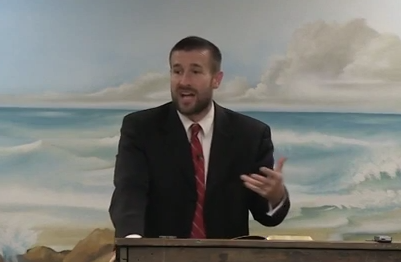 … when it’s learning time, it’s silence time… the Bible’s really clear on this. Even if they were to have a question, they’re not to ask that question in the church, number one. And number two, even if they want to ask that question to their husband, they should wait until they get home… And by the way, this is why I don’t believe that women should say “Amen” during the preaching either.

He quotes the Bible for this, of course.

I think it’s the passage where Jesus tells the woman at the well, “Shut the hell up.”

March 24, 2014
Jewish Bigamist Is Picketed At His Own Wedding For Not Giving His First Wife the Traditional Divorce Document
Next Post