Take a look at the faculty members at Cedarville University in Ohio — an Independent Baptist school — and see if you can spot all the female professors in the School of Biblical and Theological Studies.

I had to scroll down for a while… but then I found her. Erin Shaw. (Yep, singular. There’s just the one.)

I don’t have any reason to condemn her, but I do want to point out that she appears to be the only faculty member in the department with no Ph.D. or professional teaching experience.

There used to be credentialed women in the department’s faculty but most of them left when there was a shakeup in the administration and a new regime took over.

Why did they all leave? We didn’t really know because the school made them sign confidentiality statements, but I think we have the answer now.

School officials are putting restrictions on the students who can take her classes:

“In courses where we seek to equip women for women’s ministry in the local church, classes have been reserved for women in order to accomplish this goal most effectively,” said Mark Weinstein, spokesman for the university.

That’s a fancy way of saying, “We refuse to let a woman teach any male students.” At least when it comes to anything biblical. 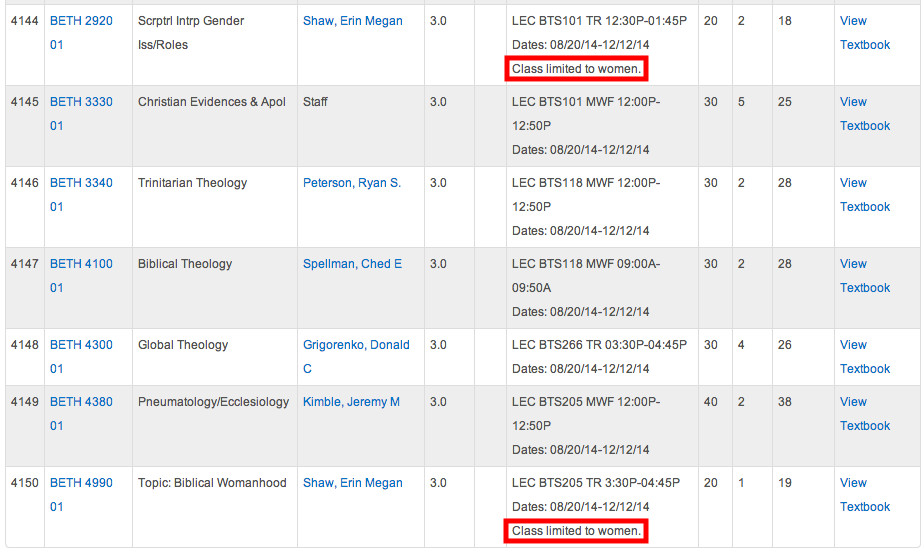 Because the school believes, I suppose, that men can learn nothing useful about the Bible from a woman… at least one who outranks them in a classroom.

I don’t even understand this from the fundie perspective. If you’re training to become a church leader, wouldn’t it be helpful, even from a managerial standpoint, to learn about women’s ministries?

It’s just another reason no intelligent student should want to go to this school — and a major reason secular companies should think twice before hiring students who graduate from this school and agree with that policy. If a student can’t handle a female professor, he likely can’t handle a female boss. Leave those students to the churches where they can remain in a bubble.

Sarah Jones, a former student at the school who has since become an atheist, puts this news in perspective:

This isn’t higher education. This does nothing to foster critical thought and free inquiry among students. It doesn’t even prepare them to counter opposing viewpoints. If this is the path Cedarville chooses to take, it won’t be a college any longer, it’ll be a glorified Sunday School. That’s fine if you want to produce graduates who can only function in fundamentalist echo chambers, but it certainly doesn’t prepare them for the real world. It doesn’t even encourage them to empathize with their fellow Christians.

Here’s what it does do: train half the student body to disregard the other half and treat them as if they’re incapable of holding worthwhile opinions on the religious tradition that defines their entire lives.

To quote the school’s infamous marketing slogan: That’s so Cedarville.

***Update***: An earlier version of this post said that female faculty members in general were not allowed to teach male students. In fact, that rule only applies to female faculty members in the School of Biblical and Theological Studies. Not that it’s any more acceptable… Thanks to Bob for the correction and my apologies for the oversight. I’ve also amended the line about companies not hiring students from this school because it’s a fair point that students shouldn’t be punished for the problems of the administration.

March 22, 2014 Religious School Revokes Admission of Student After Finding Out He's Gay
Browse Our Archives
What Are Your Thoughts?leave a comment