Louisiana has a state motto, state bird, and state flower. 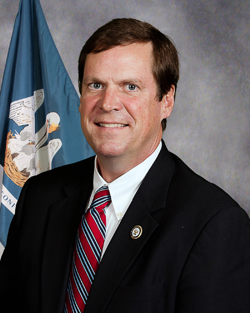 Guess what it is.

I’ll give you a hint: Carmody is a Republican.

If you guessed the Bible, you win! (And we all lose.)

Rep. Thomas Carmody… filed House Bill 503 this session. It would make a specific bible, the oldest copy owned by the state, to become the official state book.

If the bill passes, Louisiana will join Alabama as the only states to have a holy book as the State Book.

Forget whether or not this is legal for a moment. There’s really a simple test to see if this is a good idea: If an old Koran sat in a state museum, would anyone consider making it the State Book? If the answer’s no, then you don’t get to do it for the Bible either.

The state symbols are supposed to represent the culture of the state, something that can be shared by all of its residents. The Bible simply doesn’t belong in any collection meant for everyone. Are there no local authors worth considering? Robert Penn Warren‘s All the Kings Men is one of the great American novels, written while the author was a professor at Louisiana State University with the main character modeled after a former Louisiana governor. Is that not an option?

March 21, 2014 Billy Graham's Daughter Says Missing Malaysian Plane Could Offer a Glimpse of What the Rapture Will Look Like
Browse Our Archives
What Are Your Thoughts?leave a comment