Sen. Ted Cruz Is Now Wrongly Claiming He ‘Won’ the Case to Keep ‘Under God’ in the Pledge March 20, 2014 Hemant Mehta

Sen. Ted Cruz Is Now Wrongly Claiming He ‘Won’ the Case to Keep ‘Under God’ in the Pledge

Senator Ted Cruz said a lot of crazy things at the Network of Iowa Christian Home Educators conference Tuesday, many of them about atheists. In one instance, he told the audience about how he fought against Michael Newdow to keep “Under God” in the Pledge of Allegiance (4:05 in the video below):

“Texas brought together all 50 states before the U.S. Supreme Court defending the Pledge of Allegiance — and we won unanimously.”

That’s a lie. Cruz didn’t win anything. 5 of the 8 justices — Justice Scalia had recused himself — essentially threw out the case altogether saying that Newdow didn’t have proper standing to bring the case to court. While the other three ruled against Newdow, there was no official ruling on the merits of the case. It’s like Cruz is taking credit for winning a boxing match even though his opponent was disqualified. 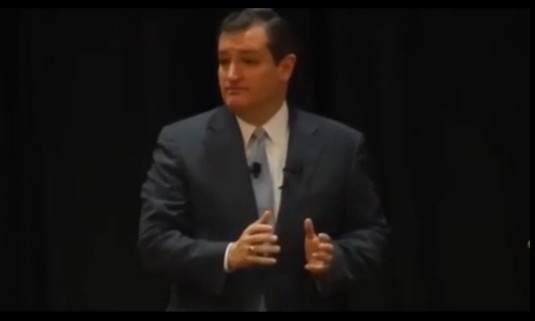 We have never seen an administration with such hostility to religious faith… You know, last year, there was a chaplain in the Air Force up in Alaska who wrote in a blog post the phrase “There are no atheists in fox holes.” He was ordered by his supervising officer to take it down.

Then the audience laughed and applauded.

First of all, the military was right to take down Lt. Col. Kenneth Reyes‘ post (though it’s back up now). It wasn’t that he couldn’t express their faith, but that he was perpetuating a lie about atheist soldiers.

Second, it’s absolutely not the “job of a chaplain to be insensitive to atheists.” Since when is it the job of any Christian to be a dick to non-Christians? Even though Cruz was presumably joking, a good chaplain ministers to all soldiers, regardless of faith. That would apply to Humanist military chaplains, too, if such a position existed — it wouldn’t be their job to tear down faith, but to meet people where they’re at and counsel them as necessary.

Finally, it’s incredible that Cruz says this administration is hostile to religious faith when the (Christian) President has expanded the role of the Office of Faith-Based and Neighborhood Partnerships, spoken favorably about religion at religious events, and alluded to his own belief in God many times over. If he’s hostile to religion, it’s not like he’s all of a sudden reaching out to atheists. And if there’s any “hostility,” it’s only because the Christian Right has demanded even more special treatment than usual.

So Cruz spoke to a bunch of children this week and lied to them repeatedly over the course of seven minutes. Because that’s what Jesus would have done.

(via Raw Story — Thanks for Brian for the link!)